After a few more days relaxing on the beach in Nha Trang and eating surprisingly good Greek food we boarded another night train, this time heading for the bright lights of Saigon (Ho Chi Minh City as its been officially named since ‘The fall of Saigon’ in 1975)

As it was Chris’ last stop before heading back to England he booked us in to the Rex, a ridiculously fancy old colonial hotel. We were greeted by businessmen smoking huge cigars and a lady playing the piano in the lobby. Even at my peak I wouldn’t fit in in such a place, let alone having rolled off a very sweaty sleeper train.

Saigon is huge, far bigger than Hanoi and sprawls out across 19 districts. The size of the place has always intimidated me and I’ve tended to have short stays basing myself in the touristy district 1. I made a contact prior to arrival in the hope of buying an official Grand Sports Vietnam national team jersey. As most are fake in Hanoi I felt I could trust the guy working for the official supplier. I got an Uber motorbike driver (yes Uber are here and for motorbikes too!) and we headed out in to the unknown…..district 3! The road was long and every few building the driver hit his brakes to check the numbers. We were searching for 530. It was not dissimilar to being on a Bucking Broncho. Surviving the ride and  US$20 later I was now the proud owner of a brand new football shirt that is clearly not meant for someone who enjoys an ale or two.

A night at Pasteur Brewery, conveniently located below our hotel, ensued. Feeling a little delicate I wasn’t fancying the drive out on what some call the ‘death highway’ to the Go Dau Stadium. In the end we voted against the bus and splurged (not much!) on a car. Once at the stadium we confused some more locals with Chris’ Hertford Town scarf before I tried my hand at a Stop Motion stadium wander. It’s my first attempt and the next one is much better:

Gò Đậu stadium is located in Thủ Dầu Một, the capital city of Bình Dương Province, about an hour’s drive from down town Saigon. Full of industrial parks I’m yet to find a reason to spend longer than necessary in the area.

As we sipped on rancid energy drinks, a girl approached one she saw my T&T Contras shirt. “T&T fans?” “Yes, yes we are” “wait here, more will come”. I was excited, hoping the 20 or so I met previously would be in attendance. Only five turned up. 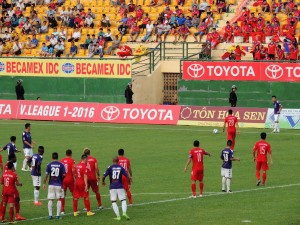 They were noisy, and backed by what must have been a number of ‘paid’ locals, complete with a drum and cymbals (the worst kind of noise for a hangover) but no colours. They knocked out traditional sounds i’ve often heard at work in school playgrounds. They left promptly at the end with no appreciation shown for the team. This idea of fans brought in to make noise still doesn’t sit comfortably with me.

The game began, and T&T were quickly behind to a Dang Van Thanh goal after just 4 minutes. “Oh no, not the cup final all over again”. These two met here in last season’s Cup Final and T&T never recovered from conceding an early goal and ended up losing 4-2. Today though T&T settled and were easily the stronger side. There should have been a penalty for handball, obvious to us in the stand but not to the ref just 4 yards away. Eventually, exciting midfielder Nguyen Quang Hai equalized. Half time came, 1-1. I was nervous. This is one of the only places I’d not seen T&T win. Their last victory came in a 1-3 win in March 2012, with goals from Cristiano, Sỹ Cường & Nguyễn Văn Quyết

What came next has surely made it the game of the season. In a period of just 38 minutes there would be 7 goals as the game swung from end to end. Samson (1-2) put T&T ahead and the game grew feistier, with Thanh Luong singled out for special treatment by the tough Binh Duong midfield. As the tackles flew in T&T stayed focused and produced the goal of the game. Thanh Luong leapt one challenged, ducked another, slipped the ball through to Samson, who played a perfect pass with the outside of his boot to Van Quyet (1-3) The national team striker took one touch before smashing a reverse shot back across Bùi Tấn Trường. Wild celebrations from the 6 T&T fans, the bench and the tagalongs.

I was about to see T&T win here for the first time. Stay focused, shut up shop, contain Amougou and Firer in the home attack and then hit long balls to Samson. Simple right? But Binh Duong hit back through Tien Linh (2-3). Nguyen Quang Hai got his second for T&T (2-4). Le Cong Vinh (3-4) scored a week goal from a corner before Amougou chipped in from the penalty spot on 85 minutes (4-4). Silence from our section.  We were going to lose.

But there was still time for a couple more twists and the main one was to fall in the favour of T&T as they sealed a dramatic late winner. The ball somehow fell to Do Hung Dung inside the box who calmly obliged to make it 4-5!! Unbelievable! On a rare occurrence T&T tried their luck at time wasting (in my non-biased view T&T do this the least in the VLeague) but clearly aren’t very good at it. Sam Ngoc Duc, already on a yellow took a throw in which had no chance of entering the field of play and was deemed ‘timewasting’ for a second yellow and subsequent red card. He was fuming, kicking bottles as he left the pitch. It didn’t matter as T&T held on for a dramatic win and Sam Ngoc Duc, well, he still made team of the week in one of the sports publications.

Jubilant Club Manager Quoc Hoi led the team over to applaud us, the 8. Mainly the noisy 6, plus me and Chris.

Next stop: Back to Saigon for Saigon FC v SLNA