Hai Phong, 100km east of Ha Noi, are T&T’s nearest rivals in the VLeague so I have been especially looking forward to this ‘local’ derby. I was also looking forward to showing two of my friends (the two who I missed the previous thrashing of Kien Giang for), who were over from London, T&T in action and for them to experience VLeague first hand. Due to being my friends tour guide for a few days I had planned to spend a couple of days out on Halong Bay relaxing and enjoying the majestic scenery of the area. The match was also at the forefront of my decision making seeing as Hai Phong city is an easy bus ride from the port of Halong; how convenient!

I was very excited about this game as I’d never been to the city of Hai Phong before and I’d also heard the Hai Phong fans really get behind their team and create a good atmosphere. Hai Phong is another pleasant city with a relaxed feel to it. In the center of town a park runs through with numerous waterfalls throughout. With the cool evening weather this is the perfect place for the locals to relax, roller blade, play some badminton or just wander around. 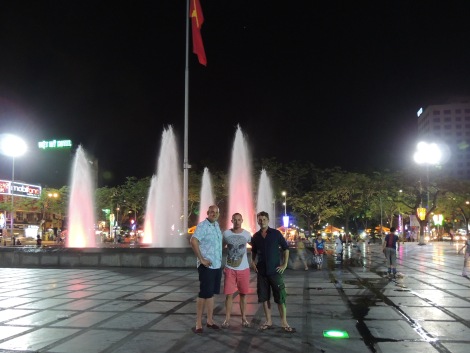 Hai Phong, with friends from London

On the afternoon of the match the weather must have been at least 38 degrees and as usual I insisted on leaving early for the stadium to soak up the pre-match atmosphere, which includes the regular debacle, due to my lack of Vietnamese, of trying to buy tickets for the correct entrance. Two hours before kick off and there were plenty of fans around. This was going to be a big crowd. Excitement levels began to rise. Soon we were spotted by the few Ha Noi T&T fans that had arrived early and led over to a parking area with shelter from the sun. We were greeted with smiles from the other 15 or so fans also sheltering from the sun. We were told to wait and that three coaches of T&T fans were on their way. I get far too fidgety and needed to wander amongst the Hai Phong fans and see how they were preparing for the game.

Fans on scooters arrived with hundreds of balloons for the game, while others formed not so orderly queues at each entrance, all desperate to get their favourite seat in side or one in the shade. My presence again drew stares, a few comments from fans and also numerous handshakes accompanied with joyous smiles and words of “Hai Phong, Hai Phong”. Without thinking my instant response to these was “Khong (no!), T&T!” This was met with initial bewilderment and then laughter. 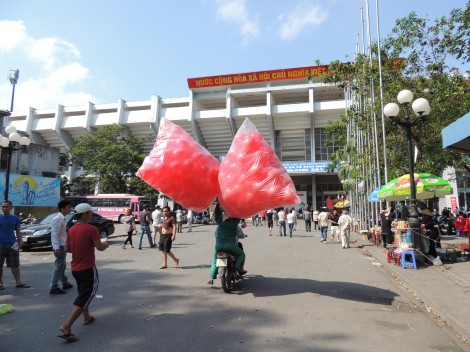 It was time to move as someone got word that the other T&T fans had arrived, so we all moved around the outside of the stadium toward the away entrance, which as with all away games was still locked. Our minor celebrity status then kicked in again as many of the fans remembered us from the away trips to Thanh Hoa and Ninh Binh, with the added bonus of my two friends from London. With the gates locked it was time for more photo opportunities with the T&T fans and we were introduced to a lady I recognize from previous trips, who turns out to be the mother of T&T attacker, Van Quyet. A nice jovial atmosphere was developing at the stadium I’d been warned to stay away from; I felt we were in for a great afternoon; especially when the gates were thrown open and no one had to pay….again.

As the game drew nearer the home fans started to make some noise, with the main congregation in the exposed stand opposite the covered main stand. A large crowd of 16,000 had turned up for this clash of two teams who will probably end up vying for the title. Gonzalo kindly picked me out of the crowd to give one of the numerous free shirts prior to kick off (which I subsequently left in a taxi!!) and I guess the news of the blog has spread slightly.

Due to the heat, the game began at a slow pace with not much created in the first 15 minutes. I have no idea how people can play in these temperatures, even after 5pm it must have still been above 30 C, as I was pouring with sweat just standing still! Hai Phong started to apply some good pressure and Gilberto was looking good for them. On 26 mins Gonzalo did get the ball in the back of the net but it was ruled offside. The game started to open up, but mainly in favour of the home team; Quang Hai just couldn’t reach a great cut back with an open goal in front of him and T&T keeper, Hong Song, tipped over Antonio Carlos. The opening goal then came on 44 minutes, and it was yet another great strike in the Vleague, Hai Phong’s Nguyen Minh Chau unleashed an unstoppable shot from outside the area. 1-0 Hai Phong.

Hai Phiong pressed forward in the remaining minutes with Nguyen Quang Hai missing a great chance and all I could think was make it to half time at only 1-0. Which we did. Disaster then struck less than a minute in to the second half when Gilberto dispatched a nice cut back beyond Hong Song. 2-0. I turned to my friend from London who looked a little dejected and said if there’s one thing I’ve learnt about the Vleague it’s that there are often crazy scores and particularly goals when Ha Noi are playing. At 2-0 down I was still confident of a good result.

So were the T&T players as they suddenly upped the pace of the game. Had they conserved energy in the slow pace of the first half in order to surprise their opponents? It seemed. Thanh Luong, on the left side of the Ha Noi midfield, really came to life with a dazzling display of pace and trickery to cause the Hai Phong right back real problems. Also, the introduction of Ngoc Duy (53 mins) added fresh legs early on. Spaces in midfield then became full of the Yellow of T&T; Ha Noi were taking control of the game. More great work, on 60 minutes, down the left from Thanh Luong led to a great cut back, but  Gonzalo mistimed his shot and the ball continued on to Samson who slotted home from a few yards out. 2-1! Slightly fortunate.

Ha Noi were now in the ascendance and 6 minutes later were level. A nice cross was played in and a beautiful knock fell to Ngoc Duy who fired home from just inside the area, a great finish. 2-2.  Cue wild on pitch celebrations and delight amongst the travelling fans tucked in to the corner! The home fans were not so happy and began throwing things on to the pitch, which sadly continued for the rest of the match each time a T&T player went near the touchline.

With 24 minutes remaining surely Ha Noi would go on to win the match. Or would they fight back like SLNA had done for a 2-2 draw at the Hang Day earlier in the season. With twenty minutes remaining Hai Phong did start to press and it took a great last ditch tackle from Ha Noi captain and centre half, Cristiano, to deny Hai Phong striker Le Van Tan a clear goal scoring opportunity. A minute later T&T full back, Nguyen Hong Tien, made great clearance with Hong Son in the T&T goal beaten.

Then it happened; a high ball up to Gonzalo, who with plenty of time controlled the ball, took it down and with the home defence sitting back, turned and took one stride before placing an unbelievable strike right into the top corner of Dinh Xuan Viet’s goal. 3-2!!! What a comeback, what a strike, delirium amongst the travelling fans. Gonzalo celebrated in front of the main stand, then was subsequently dodging bags of water and sandals, but it didn’t matter. Ha Noi had come from 2 down away from home to take a 3-2 lead, with only 4 minutes remaining. 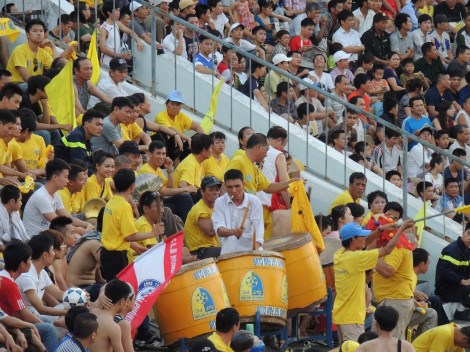 Hundreds of home fans made for the exits, with many under the impression the Ha Noi players would be better off with their drinks and sandals than they would. Items rained down from both sides of the stadium but T&T played out for what well could be an important win in their quest for a second Vleague title.

During the weeks up to the match numerous Vietnamese friends and colleagues had warned me of the ‘hooligans of Hai Phong’ and that travelling to the game would be very dangerous. After internet searches I did find that Hai Phong do have a rather unfortunate element among their fans who like to cause a little trouble. However on this occasion it seemed quite tame. The home fans did throw many items on to the pitch once they began to lose, mostly bags of drinks (no bottles allowed), so effectively water bombs. There was also the odd sandal thrown. At the final whistle, T&T captain, Cristiano, came to the fence and kindly gave me his match shirt and had a chat. But, sadly, a home fan standing nearby holding a pack of biscuits in one hand and his daughters hand in the other, decided he no longer needed the biscuits and threw them towards Cristiano. Fortunately he missed by a long shot; it would have been hilarious if he’d have opted for his left hand and thrown his daughter instead. On a more serious note I’ve never seen as many ‘missiles’ (as the English press love to call them) thrown on the pitch at a match that I’ve attended. A rather unnecessary scene, but it did make the victory even sweeter.

Next up Long An make the long journey from the south to the Hang Day stadium, with Ha Noi looking to make three wins from three.