After a 20 day mid-season break for internationals the Vleague returned with Ninh Binh traveling to the Hang Day stadium. In all leagues it’s always interesting to see how teams fair after such a break; with form either lost or gained and players returning injured.

I was excited for league action to return and had spent a lot of time trying to read up on the Vietnamese game and the current affairs within it. During a nice cycle around Tay Ho (the largest lake in the city) I couldn’t stop wondering about the game here; what determines a teams’ form? Who are the real challengers for the title? It seems everyone is capable of beaten each other, especially on home turf. Ha Noi and Da Nang had put decent runs together, while HAGL, Hai Phong and the impressive Song Lam Nghe An had all begun to falter.  I was hoping this form would continue in to the second half of the season, starting with the visit of Ninh Binh. The earlier meeting between the two had ended 2-0 to Ninh Binh. 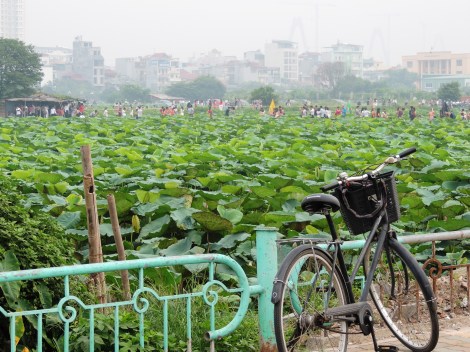 With kick off scheduled for 5pm I foolishly suggested it wouldn’t be too hot to sit in the open stand opposite, with the T&T fan group, to take in the atmosphere and view the stadium from a different angle. Grabbing my pre-match ritual of a cafe nau da I sat and watched as quite a few T&T fans began arriving and instantly a few of the older ladies spotted us and waved us in. It was far too early to move from the shade; even in the late afternoon Ha Noi can be unbearably hot.

I’ve recently found out that the T&T fan group gain free access to all matches, hence not being able to buy a ticket on that side of the stadium. As the ‘fans’ all rushed in late the police began asking questions of those not wearing the groups yellow t-shirt. I wondered whether we’d get in, but as in many situations here the police looked at us in a puzzled way, guessed that we didn’t speak Vietnamese and waved us in. I had in fact already purchased tickets for the other side so I’m not a total freeloader, I like to think my 50,000VND helps the future development of the game here, I doubt it though.

What was I thinking, it’s June in Hanoi!! It was hot, crazy hot in fact and the sweating instantly began. Why do the games not start later? Surely a 6pm k/o would be much better. By the time 10 minutes had elapsed and the players entered the filled I was pissing with sweat, without moving! I was about to watch in admiralty as these 22 players were about to actually run around in this heat, complete with knee length socks on!

sun hats…..they kindly made us some too.

In recent weeks I’ve found out some of the players had seen the blog and it’s not too hard to pick out the couple of foreigners in the crowd (T&T aren’t exactly on the tourist map….yet) and it was nice to see Ngoc Duy point us out to Thanh Luong as they entered the pitch, with smiles and waves exchanged (which caused me to sweat even more). I sometimes wonder what the players must make of me travelling to these games. Ninh Binh had brought a decent number of fans with them, possibly 200-250, and were kitted out in their red and white making plenty of noise to our left.

Ha Noi T&T had a slightly different line-up with Van Quyet on the bench and Tien Dung replacing Van Bien in the centre of defence.  The game was a cagey affair; probably due to the heat and mid-season break. T&T looked nervous early on, knowing that a win would sit them comfortable at the top of the table. It was Ninh Binh who had the first opportunity, with the ball in the net after just four minutes, only for it to be ruled offside. The impressive Van Hieu in T&T’s midfield had the home sides best chance, forcing a great effort save by visiting keeper Manh Dung. Half time 0-0.

stunning sunset over the main stand

T&T started to pressure in the second half with Thanh Luong, Van Hieu and full back Hong Tien all impressing with their attacking play. But it was to be the experienced centre half and club captain Cristiano who would break the deadlock with a great near post headed from a corner after 69 minutes. This goal seemed to make the game even tenser as Ninh Binh looked for the equaliser that would ruin the perfect sunset setting over a T&T victory. Deep in to stoppage time Ninh Binh sent a high ball forward that Anjembe beat Hong Son to and his header hit the inside of the post. The ball then proceeded to roll along the goal line with Ninh Binh players advancing, only for the goal scorer Cristiano to clear the ball to safety, securing the three points for a second time.