Being a bit of a football geek when following my team(s) I’ve often found myself getting carried away with optimism. Last season I found myself believing Arsenal could win the Premiership, until mathematically impossible, when actually they were realistically competing for 4th spot. I’d also clung on to the idea of Stevenage reaching the League 1 play-offs for a second season in a row. I dreamt of the possibility of the mighty ‘Boro’ moving up the Pyramid and being pitted against the likes of Manchester United and Chelsea, based on merit and not after another fine FA Cup run. Stevenage FC, were in fact on a treacherous run of form for the entire back end of the season and even parted company with Gary Smith, their manager. I still, ludicrously held hope of a fine run to snatch a play-off place. I think it’s generally around mid May that I wake up, read the final league tables and see what actually happened. Stevenage in fact finished just a few points away from relegation and will be one of the favourites to go down next season.

T&T had only picked up one point from a possible six and my head started to tell me this was not going to be their season; SLNA are playing well, DaNang are playing badly but winning and HAGL have created a fortress at home. Last season’s VLeague runners-up Xuan Thanh Sai Gon were to be the days visitors, themselves on a decent run of form.

As I watched the skies roll in over Hanoi, about an hour prior to kick off, my optimism suddenly changed. I needed to be at the Hang Day, right away.  In two years of living here I think I’ve only managed to outrun the rain on a handful of occasions. I hopped on my bike and frantically cut my way through the narrow alleyways of Ngoc Ha village, dodging those on motorbikes recklessly heading home, in the opposite direction to me. 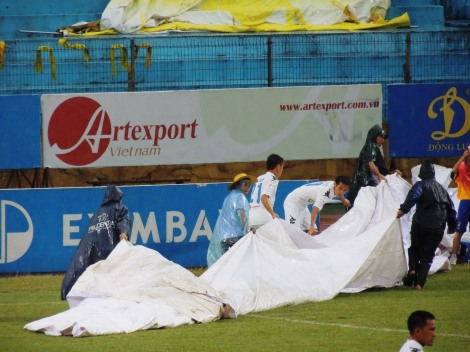 I lost, the rain won. It didn’t matter, I was wet and in the stadium. My negative thoughts of a further T&T decline were washed away with the huge storm that was battering Hanoi. Rain, especially this much rain, can change the outcome of a game.  The players were totally drenched during the warm up and a layer of water had begun settling on the surface. This was going to be fun; a fast slick pitch, crazy wind, sliding tackles and hopefully a T&T victory.

The slick pitch suited Hanoi and there flowing passing game. A change in personnel also added a different dimension to Hanoi; Gonzalo was on the bench (I assume carrying an injury), Samson moved to be the lone striker supported by the energetic Thanh Luong and Van Quyet. Samson was lively in his free central role and could have taken the lead after just 30 seconds, only to be denied by Tan Truong, the visiting keeper’.

singing in the rain

Hanoi’s early dominance was evident by the fact that Hong Son’s first touch in the T&T goal came on 15 minutes, but only after Saigon striker Amougou had race clear, rounded the keeper’ but somehow saw his effort go wide. T&T were a goal to the good after 40 minutes and it was Samson who seemed to get the final touch on a free kick that baffled the defence, hit the keeper, hit Samson then ricochet into an empty net. 1-0.

Five minutes in to the second half and Samson had doubled the lead with a nice header after exceptional play  from Thanh Luong; racing 40 yards to beat his marker and deliver for Samson to finish. The game didn’t really feel like much of a contest; however Hong Son was called in to action numerous times and was eventually named the keeper of the week for the VLeague. Strange seeing as T&T dominated and really should have won by 7-8 goals, having missed far too many opportunities.

For me this was a big result, a possible turning point in the championship race. Other teams had once again dropped points and T&T’s mini blip was halted. Yet the fans around me didn’t seem too pleased, with only a handful bothering to rise to their feet to celebrate the opening goal. After the match news sites and online fan groups were filled with negativity towards the result. “Hanoi missed too many chances”, “Samson misses again”, according to many The T&T striker was particularly to blame. 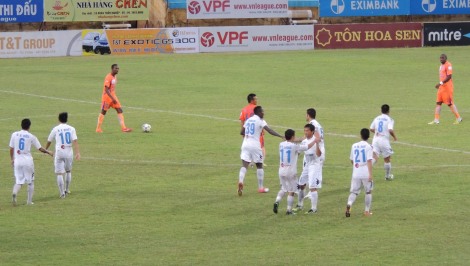 After a mini blip, beating a form team, the teams makeshift striker scoring twice, treacherous conditions and keeping a clean sheet I’d say it was a pretty good afternoon’s work for T&T. Yes they missed far too many chances, but these were chances that weren’t even created a week ago against Da Nang. I feel I’ve missed something, possibly a news story released this week or an interview that seems to annoyed the fans.

Back to fourth in the league and a game in hand. The Vleague will now take a two week break, again, to allow the quarter finals of the Cup (where T&T travel south to Long An) and then the BIG ONE that all of Vietnams football fans are talking about; ARSENAL FC v Vietnam (national team/All-star team). Ha Noi will resume on 20th July away at relegation/financially threatened Kien Giang in the Mekong Delta.