Prior to the start of the season, I was initially disappointed to see that Can Tho FC would be playing in the second division, as I had high hopes of including a visit to the Mekong Delta. Settling down with a paper map of Vietnam and some sticky post-it-notes to plot my exploits I was soon delighted to realize that Kien Giang are based in Rach Gia, the capital of  Kien Giang Province, some 700 miles south of Hanoi and in the heart of the Mekong Delta. Beautiful.

A fixture I’d been anticipating for a few months had finally arrived, even more so as Kien Giang have spent much of the season in the bottom two and its rumored financial difficulties are hitting the teams morale; surely an easy three points for T&T.

Being based so far from Hanoi and having limited time off from my job, the logistics of this fixture were not easy. A number of years ago, I passed through the region on a bus destined for Cambodia but had never actually stopped off, so I was very excited. However, last minute fixture changes have made it impossible to arrange travel more than ten days in advance, and with this in mind, plus my limited finances, the only option was a night in Saigon, followed by an early morning (6am!) flight to Rach Gia.

Tired. Very tired actually, we touched down at 06.50am. I gazed from the taxi window at the bustling Saturday morning street life and took in the smells of the street food, I was instantly drawn to this small city of 226,000 inhabitants. We were tucking in to a bowl of Bun Ca (delicious noodle soup with fish patties) by 07.30am.

Bun Ca breakfast (ten bowls of noodle soup, including many different varieties, were consumed for the making of this match report)

We admired the blue skies above, again contemplating leaving the big city behind for a smaller city lifestyle. This lasted approximately 23 minutes! As we were quite abruptly reminded of the monsoon season which batters most of the country for a few months a year, especially this port town that we were in enjoying our noodles. The blue sky turned black as fierce clouds and strong winds rolled in off the Gulf of Thailand. After nearly three years in Vietnam, I really should remember rain gear when travelling.

Due to an ill-timed bout of sickness, I was to attend the game alone. The Rach Gia stadium is situated about 7km from the river front in the city centre. On arrival I was in awe at the huge grandstand that rose high, was this going to be one of the largest stadiums in Vietnam?? This looked impressive. Again I was wrong, this was the only stand, and the rest resemble the outskirts of Hertford Town FC. It was actually quite beautiful as faded walls lined the perimeter and lush greens trees rose high above, even giving some vantage points to some local kids.

The fans of Kien Giang, although few in number, were keen to support their team and were determined to enjoy the afternoon. Once again, I was the only ‘foreigner’ in the stands, drawing many curious stares and finally some big smiles. The locals around me humorously followed their team, mocking each other each other when one would get a little overexcited when seeing the ball hit the side netting rather than beating Hong Son in the visiting goal. At one point there was shouting in English, maybe for my benefit, abuse in fact and directed at the Hanoi players. As a man a few rows back repeatedly formed various sentences containing ‘f@&k, Hanoi and you.’ Together the fans all roared, laughing in unison.

The Kien Giang players were clearly out to ruin my afternoon and expose my naivety at thinking this would be an easy three points, as they pressed hard and seemed to rile the Hanoi players. The home fans shouted for a penalty and their team pressed again, and on 34 minutes they saw their team strike the bar. Somehow, T&T went in to half time with a 1-0 lead, thanks to a Van Quyet strike just before the break. Clearly T&T were technically better than their hosts, but it was a little fortunate given the home side’s endeavor and drive to somehow climb away from the relegation spot.

Kien Giang were not fazed by conceding just before the break and continued to create many chances. Hanoi were struggling, and things were made even worse on 54 minutes as full back Quoc Long received his second yellow card and was subsequently dismissed. Eventually Kien Giang got the goal they deserved. Felix Ajala rose to beat Hong Son unchallenged, 1-1. Kien Giang pushed for the winner as yet more rain came, forcing the fans, myself including (much to the delight of those around me) to flee to the back of the terrace. Full time 1-1. 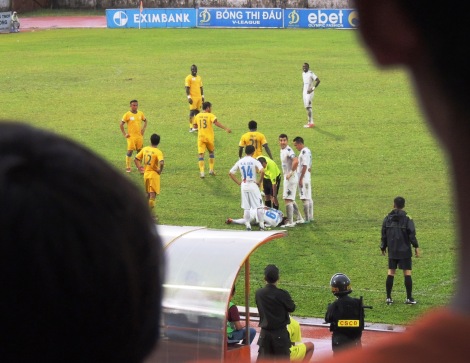 Initially I was disappointed; two points dropped at lowly Kien Giang, but as the game panned out this was actually a well fought match, and a deserved point for both teams. The players seemed clearly down afterwards, but they battled well when down to ten. Some local fans cheered them up after as they jokingly hugged and kissed the hands of the visiting players. Points dropped but overall a good game, funny fans and a beautiful stadium.

After wandering about 2km without being able to find a taxi a xe-om guy (motorbike taxi) spotted me, saving my legs from another 5km and it was time to venture out to see what Rach Gia had to offer in terms of nightlife. We were keenly recommended a strip of bars by the receptionist at our hotel, with the promise of “bia, dancing, singing and lots of people”, perfect. It was pitch black, nothing in sight until finally, true to his word, there was a strip of bars/cafes each pumping out Asian techno tunes and lots of neon lighting. These huge places all looked to offer the same, a bar, café, karaoke, disco and lots of scantily clad waitresses.

But once inside it was clear that everyone was ignoring the disco, karaoke and even the girls in pink miniskirts, choosing instead to watch the violent low budget sci-fi film on TV’s placed throughout. With no food on offer, a beer was consumed and we moved on, eventually settling for a beef/bia street restaurant on the main road. Perfect; lots of people, lots of great food (Bo Lot, My Xao), plenty of cold beverages and more great local hospitality. There was even time to get caught in one last downpour.