T&T travelled to Dong Nai, another trip to the south of Vietnam, with the team located in Bien Hoa City, approximately 34km from Ho Chi Minh City. I figured this would be a straightforward trip, catch an early morning flight, have some lunch and then hop on a bus. The game should also prove to be straightforward, although Dong Nai have proved many pre-season doubters about their ability to perform in the top flight, they would still, hopefully be no match for title chasing Ha Noi T&T. Plus there were no new suspensions, meaning Gonzalo could return to being a striker and the defence was back at full strength.

I was grumpy on arrival in Ho Chi Minh City. A monsoon was due to hit Hanoi at 3am Saturday morning. The first waves of the storm woke me at 3.30am as the rain lashed against my windows. Once in HCMC I seemed to disturb the living dead in the dorm room I’d booked for the night, I felt it best to find more coffee and try to wake up for the match ahead.

Ho Chi Minh City was scorching; by the time I’d walked the 15 minutes to the bus station I was already pouring with sweat. I hopped on one bus for 10 minutes or so, before being told to get off and wait for another one on to Bien Hoa. This is fine, except the shaded bus shelter also double as the local urinal. The next, older, bus rumbled down the street. It was my bus, and I’d be sharing it with a lot of people, half a market and even a bicycle. Gingerly I held on as we bumped along, worrying constantly that I’d fall into the pile of women sleeping on the seats and floor below me. I’ve often be mocked for the places I can fall asleep, but I’ve nothing on Vietnamese old ladies. These women can perch on the smallest step, stool or even a fellow passenger’s foot and manage to be asleep instantly.

Half hour in to the journey the skies seem to turn black in seconds and the latest monsoon unleashed itself. The driver wasn’t fazed by the lack of visibility and still accelerated onwards as the roads turned in to streams.  Learning from previous trips and that monsoon season means rain I was feeling rather smug that I’d purchased a disposable poncho and a small umbrella. As we pulled in to the bus station I reached in to my bag to find the umbrella. No umbrella! Poncho? No poncho! %&^$, they were in my other bag.

I took shelter with the other stranded commuters, nobody was going anywhere. For the first time I thought about quitting and turning around. This much rain, with just two hours until kick off, surely meant it would be abandoned. Half hour or so past and I was fed up with being openly ridiculed by a group of xe-om drivers, much to the delight of the others around me, it was time to move on. I found one older man, not taking part in the mocking of Bill, who would take me in the rain to the stadium. I clung on to the back of his bike with one hand and his poncho tail in the other trying to use it to give me some shelter.

The roads were terrible; nearly a foot deep in places, and waves were being washed over my feet and legs each time a larger vehicle passed by. According to my estimations, using the not very accurate map I’d created in my head, it would only be 5 minutes. 25 minutes later we pulled up, I was soaked through. As I stumbled through the mud and water to the ticket office, the Ha Noi T&T bus pulled up, I glanced round and saw most of the players looking surprised and waving at me.  This made the hideous journey worthwhile. I grabbed a drink and was joined by number of the squad players, who introduced themselves and sat. I was surprised that a couple of them lit a cigarette to accompany their coffee, I wondered what Arsene Wenger would make of this.

Hong Son warms up as the water is cleared

The ground had one small crowded covered stand and the three remaining stands consisted of huge, steep, colourful terracing that flowed around the pitch. Plenty of Dong Nai fans braved the rain (not forgetting their ponchos) as the groundsmen used buckets to clear the standing water. The lush green of the pitch an hour prior to kick off would soon turn to dark mud.

The game was frantic with players from both sides trying to lift the ball clear of the water with each pass. Sliding tackles were a plenty and through balls that would normally run out of play were stopping dead in the water. The T&T players seemed to be especially up for the match, with Quoc Long, Sy Cuong and Van Hieu all putting in aggressive performances from the start.  T&T took the lead through Gonazalo’s (32’) 12 league goal of the season and Van Quyet (45’) made it 2-0 on the stoke of half time, finishing from close range. 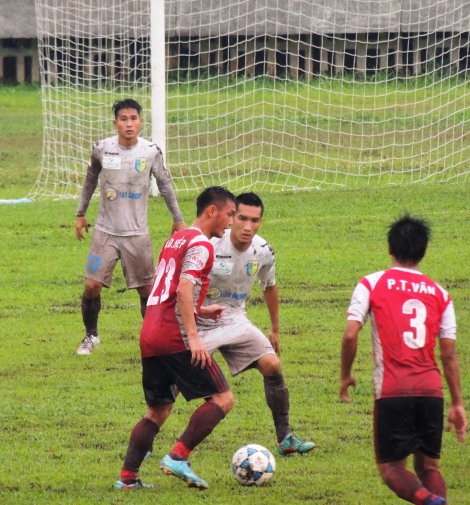 The Ha Noi team were having a fine game, especially full back Quoc Long, who was incredibly aggressive in his play and fired up. Unfortunately treading this fine line between aggression and staying on the pitch is difficult and on 57 minutes he received his second yellow and was dismissed. This was his second red card in a few games and he’ll now be suspended for two games, plus a personal fine of 5 million VND. However, new temporary defender Gonzalo dropped in to defence as Van Bien moved out wide.

Dong Nai pressed well, with Kisekka Henry a constant threat throughout, but he was unable to beat Hong Son in the T&T goal. Ha Noi soaked up the pressure, eventually killing the game when Samson (89) cooly finished beyond Minh Phong in the Dong Nai goal. Thanh Luong (90) added a fourth in the dying minutes. This was a great victory for Ha Noi T&T in tough conditions; a performance of a team worthy to compete for the Championship. The result was a little harsh on Dong Nai who performed well, always trying to play creative football. 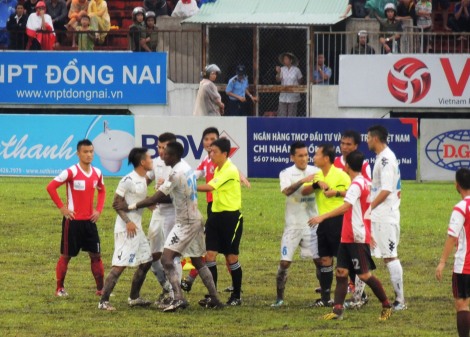 I had planned to meet a fellow T&T fan, El Anidol (I don’t know his real name), at the game but his late arrival meant all tickets were sold in the covered section. He braved the rain in the opposite stand. Being in what felt like the middle of nowhere he was kind enough to run me to a main road on his bike, before arranging for another bike to take me further towards HCMC. This driver was CRAZY, more rain and wet conditions didn’t deter him from driving like a maniac, often leaving the road to get beyond the traffic in front, for what must have been 18-20km. There’s no need for theme parks when you have these guys and their bikes. I finally grabbed a bus from the side of a motorway and was heading towards the bright lights of Sai Gon, rather satisfied with the day’s trip.

But there was one more twist; I fell asleep. Waking up well beyond the centre of Ho Chi Minh City, I know this because I could just make out the lights of the tallest building in the city, the Bitexco Financial Tower, far in the distance. One more xe om was needed, meaning a grand total of 3 buses and 4 motorbike taxis were used in what was meant to be a simple journey. The driver soon asked where I’d been, and then quipped at my response “but that’s the other direction”.