The penultimate match of the season paired Ha Noi T&T in their final away match at Dong Tam Long An, a team based in the city of Tan An in Long An Province approximately 60 km from Ho Chi Minh City. Long An had recently recorded a fine run of results, moving them safely away from the (now pointless) relegation places. With XT Saigon withdrawing from the league this was to be Long An’s final game of the season, whilst their 2013 captain would return to his parent club after a season long loan, so plenty of incentive for the home side to spoil any potential Ha Noi championship party.

Yes, today is the day that T&T could clinch the title. The permutations could be looked at, but to keep it simple a win for T&T and a defeat for Da Nang would result in an unassailable lead for T&T. To make things more interesting Da Nang would play away from home at SLNA, who were also still in with a slight chance of the title, even after coming off worse from the resulting departure of XT Saigon, dropping from 2nd place to 4th.

We’d be making the journey from Ho Chi Minh City, after a couple of days being tourists in Vietnam’s second city. The main connecting road is the infamous route 1, complete with thunderous trucks, numerous potholes and more dust than Arsenal’s trophy cabinet.  Arriving after lunch, right in the middle of ‘nap time’ we were lucky to find a café that was still open to take shelter in from the scorching sun.  The stadium was old, a little run down in fact, but you could still see its beauty (in my weird strange way) as the stands curved around. 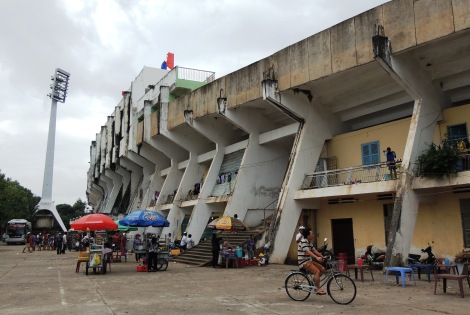 There were to be no away fans today, just us, it’s too far and expensive to expect fans to be able to make the journey. I’d recently met Bao Khanh (T&T’s experienced attacker, now often used as a substitute) and was happy to see him get off the team bus to come over and great us again. It was time for the pre-match coffee with the T&T substitutes and I was soon introduced to the Hang Day Stadium manager, Tuan. He seemed a little bewildered by the odd English guy travelling 1000’s of km to watch T&T, but soon provided us with tickets and insisted I never need buy a ticket again in Ha Noi….I was to be his guest!

Back outside the ground and I’d started to get excited, T&T could win the league today! However it was all rather muted, a small crowd looked to be in attendance and with nothing to play for themselves the home fans were rather quiet……but somewhat bemused by our presence among them in the small covered stand (large  concrete steps) than runs the length of the pitch behind the dugouts.

Ha Noi started the game brightly, with Samson, Thanh Luong, Van Quyet and Ngoc Duy all attacking with urgency. It was indeed Ngoc Duy who broke the deadlock after just 5 minutes, as he headed home a near post cross beyond Tien Phong in the Long An goal. Jubilation, 0-1! Ha Noi now began to dominate, keeping passion easily before mounting numerous attacks on the home side’s goal. 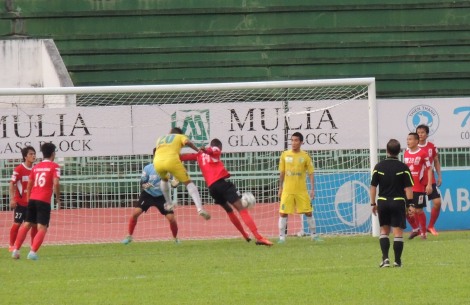 The second eventually came a few minutes before half time. Samson scrambled home his 14th goal (minus the goals against XTSG) and deservedly returned to the top of the leading goal scorers chart. Half time, 0-2! Checking the scores at half time T&T were comfortable, SLNA and Da Nang were drawing, if results stayed the same Ha Noi would be champions.

But this is football and Long An weren’t about to roll over and disappear on their end of season holidays. As the second half developed, Ha Noi were being pushed further back as Long An showed some of their fine recent form. A Long An player looped a shot over the stranded Hong Son, but fortunately for T&T the ball came back off the underside of the bar and was cleared to safety. However, Kanu finally breached the Ha Noi defence as he rose to power a header beyond Son. 2-1, seven minutes plus injury time to play.  A second goal for Long An would send the title race to a nervous final day of the season. But this didn’t happen! Song Lam Nghe An had also taken the lead against Da Nang, while Ha Noi T&T held on for a 2-1 win.