Hà Nội T&T made a flying start to their 2014 AFC Cup campaign, with a comfortable 5-1 win over Maziya Sport & Recreation of the Maldives.

T&T were without the suspended Samson & Gallagher, due to their dismissals against Muang Thong United in the Champions League, while Gonzalo was still sidelined by injury. Keeper’ Hong Son dropped to the bench with Van Cuong deputizing. 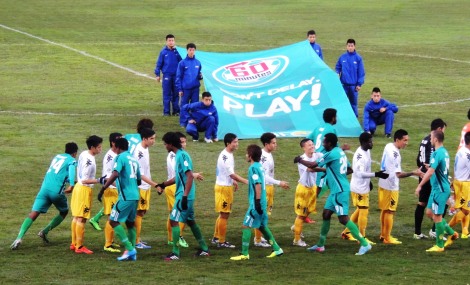 With no recognized out-and-out striker on the team sheet, it fell to Van Quyet and Hector (the only ‘foreign’ player to start) to spearhead the attack. Prior to the game the Maziya coach stated that it would be the ‘foreign players that his team would have to be wary off’, ‘they could be the difference’. Was the coach really unaware of the T&T suspensions? With only two overseas players on the pitch, it would be an intriguing battle of two largely home grown sides.

In T&T’s favour though, the Maldivians had yet to play a competitive fixture this season. Hà Nội started brightly; controlling the midfield and denying the visitors any real possession. The breakthrough inevitably came after 18 minutes as Văn Quyết finished from close range. As they continued to pass the ball around with the visitors chasing shadows, it seemed very comfortable for the home side,

However, the important second goal didn’t come. Gradually Maziya grew into the game. Hà Nội ’s slight complacency was then exposed when Maziya pulled back a deserved equalizer just before the break through Nashid Ahmed. Half time arrived 1-1.

Maziya started the second half buoyed by their equalizer, putting the home side under greater pressure. It wasn’t long though before T&T took control of the game again, carving out numerous chances. The home side had to wait until the 75th minutes to finally take the lead again, with Văn Quyết on target once more. Two minutes later the influential Ngoc Duy grabbed T&T’s third. This was a devastating blow for the visitors.

The goals continued to come as Hà Nội saw the visitors mental and physical condition drop. Ngoc Duy provided the pass for man-of-the-match Văn Quyết to complete his hat trick before young substitute Van Thanh scored Ha Noi’s fifth with a fine finish from the edge of the box.

Despite the wet and windy evening at the Hang Day stadium, T&T made the perfect start to the AFC Cup. Next up is a tough trip to Indonesia to face Arema.