News broke late last week that Ninh Binh’s club owner had asked to withdraw the team from the V LEAGUE & 2014 AFC Cup after a large number of their players admitted placing bets on their match with Kelantan.

It turns out National team striker, Tran Manh Dung, was the mastermind behind the unsuccessful scam. He coaxed 8 team mates to join his devious plan, betting that there would be more than three goals in their game with the Malaysians. Ninh Binh, who sport one of the worst kits in football history, unsurprisingly won 3-2.

Ninh Binh; not the home of fashion

The current national cup holders, sit dismally third from bottom in the VLeague, but have run away and won their group in the AFC Cup. Police are also investigating the team’s results so far in the 2014 domestic season. This weekend’s match between Hoàng Anh Gia Lai and Ninh Bình has been postponed.

Prior to last year’s national cup final, a friend, when asked who he thought would win, baffled me by stating “oh, Ninh Binh, it’s their turn, Da Nang owe them”. At the time I thought something was lost in translation, perhaps not.

League leaders, Thanh Hoa, suffered their first defeat of the season on Saturday, as Dong Nai dished out an 8-0 spanking. Yes,8-0, against the only undefeated team of 2014! The visitors took an early blow as keeper’, Tô Vĩnh Lợi , was sent off after just 9 minutes and Dong Nai, fresh from a run of three straight wins, ruthlessly took apart the league leaders. In front of an impressive 20,000 fans, Phạm Hữu Phát grabbed two goals while Brazilian Luz Henrique, helped himself to a fine hat-trick. It remains to be seen how Thanh Hoa will react to this result, but not even Arsenal have lost by eight this season.

With goals galore in Vietnam’s south, Bình Dương sneakily slipped in unnoticed to go top of the V League, as they comfortable won at Hai Phong 2-0.The result firmly establishes the wealthy team, from just outside Ho Chi Minh City, as joint favorites for the League title, alongside (my biased opinion) Ha Noi T&T.

In other matches this weekend, Đà Nẵng won at Quảng Nam 3-0 while SLNA and Long An played out a 2-2 in Vinh city.

And finally……possibly the strangest of all.

Friday evening, I was sat in the Hang Day stadium, Ha Noi FC took on HCMC, and the strangest thing of all happened. Along with a few other sorry souls who watch far too much football, I witnessed some quality lower league football.

OK, not for the entire match. Especially not when a T&T, sorry, a Ha Noi FC (same kit/stadium/fans; it’s easy to get confused) player suffered the terrifying delayed reaction to not being hit in the face and being dropped by the illusive sniper in the stands. This sparked a scene of handbags, and even some coaches decided they needed to invade the pitch. 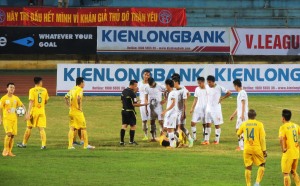 No compassion, even from his own team mates

They reminded me of when I’ve pitch invaded in the past. You cross the touchline, running joyously or angrily (depending on the occasion); 5 meters, 10 meters, you’re with the players. It suddenly dawns on you, what the hell am I doing on the pitch? You freeze, and then awkwardly walk off pretending to be a man. (Disclaimer, I’ve only pitch invaded when the Mighty Boro won the 1996 conference and then humiliated the Geordies in the FA Cup back in 1998. Some of their fans angrily entered the pitch.)