As soon as I left the comfort air-conditioning I was sweating again. Match day temperatures had soared in to the mid 30Cs in Ha Noi, with the ‘feels like’ temperatures listed as 42C!  T&T had been drawn at home against League 2’s Dak Lak in the National Cup. Kick-off times in Hanoi have been pushed back to the supposedly cooler time of 5.30pm.  5.30 in Hanoi is still bastard hot though. I have no idea how that actually play in this heat.

With lowly Dak Lak visiting I was confident I’d see a few goals from T&T; the league’s top scorers, who boast the prolific Samson in attack.

Most fans thought otherwise and decided to stay home. Like the league cup in England, I figured fans aren’t willing to pay for cup action. Then I remembered, its free entry (to stand B).Maybe it wasn’t advertised? Like many before me, football fans often complain about not realizing games are taking place in Hanoi. Most likely though, the missing few thousand had indeed watched the weather forecast.

As the game got underway, dark angry skies began gathering in the distance. It was going to be a big one. I joked with fellow fan Dung about how wet we were about to get. The wind came first, sending advertising boards crashing to the ground. 36 in total were downed. Then the rain. Big monsoon rain. The few fans opposite huddled at the back of the uncovered stand B.  Just minutes earlier, those of us in the main stand  were enjoying the cooling breeze,  but as the wind swept across the Hang Day pitch, we began cursing our decision as the rain lashed in to us. We huddled by the stairwells, inconspicuously using each other as wind breakers.

The game continued; the weather had washed away any chance of quality but what ensued was a fast, frantic and entertaining first half. T&T dominated but couldn’t find the breakthrough. Half-time 0-0. The subs didn’t even bother warming up during the break.

Hanoi T&T pressed in the second half, but found the visiting keeper in fine form, producing a spectacular double save from Van Quyet and Samson. The rain had eased and the heat began to return. T&T couldn’t find the breakthrough and it was in fact Dak Lak who came closest, when their striker saw his side-footed effort come back off the post. 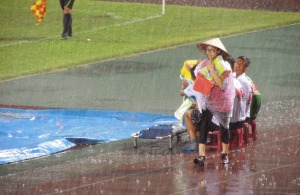 After sitting in monsoon rain for 20 minutes it was decide the ball-boys & stretcher boys needed ponchos.

Full-time 0-0. Dak Lak had held the league champions. They now had a chance to secure a shock victory via the lottery of Penalties. And they did. T&T’s Ngoc Duy would be the villain; skying his effort over the bar. Dak Lak dispatched their 5th and sparked wild celebrations as the 200-300 Hanoi fans snuck out. It was entertaining, adventurous even. I’m not sure the players would have agreed but I certainly enjoyed the evening, apart from the result.

This post is a week late, apologies. With the end of the academic year, and the alcoholic beverages that go with it, all productivity seems to slow down significantly.