Hanoi T&T, desperate to get their season back on track, welcomed Dong Nai to the capital for this weekend’s match. Dong Nai are also having a difficult start to the campaign, having secured just 3 points from their opening five matches.

I seemed to have developed something of a soft spot for Dong Nai, they’re my Nottingham Forest. For no reason what-so-ever I find myself liking them. It may have something to do with the title winning campaign; when I found myself lost, on the back of a xe-om, in the midst of a torrential storm heading to Dong Nai stadium. A fantastic day. 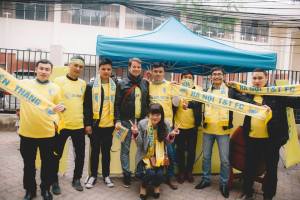 Plus, they have been boosted by the signing of Huyen Kelsey, the scorer of ‘that’ goal and cartwheel celebration, which effectively helped seal T&T’s 2013 Title. Playing for Binh Duong, the Brazilian was introduced late on and scored from some 25 yards out, sending the few home fans wild and silencing 20,000 travelling SLNA fans. I just happened to be sat in the middle of the Binh Duong faithful that day.

Prior to the game I was eager to seek out ‘the new’ fans and their bag of merchandise. Arriving early I was to find the bag had turned in to a real merchandise stall, complete with replica shirts, t-shirts, scarves and pin badges. Scarf purchased for 55,000 VND ($2) I agreed we’d meet in stand B. This small band of noisy fans clad in yellow was slowly growing.

Inside the Hàng Đẫy stadium

The new group of fans has injected some much needed life in to the Hang Day stadium, and confidence was high.

Hanoi T&T settled quickly, dominating possession and barely letting Dong Nai out of their half. Van Quyet and Thnah Luong stayed wide, allowing Hanoi to really stretch their opponents. Duy Manh was playing with such confidence and composure that it’s hard to believe it was only the young midfielder’s sixth senior appearance.

After a goalless first half the game would turn on a dubious red card. Hanoi striker, Samson, was dismissed just 7 minutes after the restart after his trailing are caught a Dong Nai defender, who of course made the most of it to ensure the league’s top scored received his marching orders. 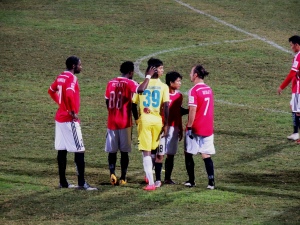 Samson is led away after his red card

This was to be a positive for Hanoi. Gonzalo, Van Quyet and Thanh Luong all seem to have more space and the goal scoring responsibilities are shared out. It’s probably due to the opponents loosing concentration once they see the league’s best player walking down the tunnel.

Just two minutes later, Van Quyet had his and Hanoi’s second. Pham Thanh Luong sent in a cross from the left and Van Quyet rose unmarked to glance the ball in to the corner.

Gonzalo could have added a third soon after but saw his thunderous effort blaze over and nearly leave the stadium, quite a feat if you see how far back the wall is behind that goal! Dong Nai offered little in the fight back, rather surprisingly as just a week ago they would have seen the T&T defence so dramatically collapse in the dying stages against Quang Nam.

A clean sheet, and a very composed display was just what Hanoi T&T needed before they travel to Vinh City to take on Sông Lam Nghệ An. Time to go and buy my train tickets…..