All aboard the night train (well, just me) – Sông Lam Nghệ An  away.

Having missed the first three away games of the season I was certainly not going to miss another one. Due to a prior commitment though, I would need to take back-to-back nights trains to ensure a Saturday return to Hanoi. The game was switched to Friday due to Hanoi’s imminent involvement in the AFC Champions League qualifiers.

Armed with a soft-sleeper ticket, my camera and an obscene amount of sandwiches, I headed to Ga Hà Nội. The beauty of the Hanoi – Vinh train is it’s point to point. Absolutely no chance of sleeping through, a habit I’ve had in the past in England, seeing both Cambridge and Peterborough at 6am on more than one occasion.

Arriving at 5am and greeted by pitch black streets and rain, my plan of walking the 3 miles to kill some time was scuppered. I found a xe-om (motorbike taxi). He seemed sober and as I’ve increased my Vietnamese lessons of late, was pretty confident guiding him to my hotel.

There’s nothing like a  white–knuckle motorbike ride in the dark to wake you up. As we belted down the streets I realized something was wrong. I remembered my day hotel was the largest building in town, but it seemed to become smaller in the distance. Clearly this odd foreigner, speaking terrible Vietnamese must want to visit a huge park with a statue of Ho Chi Minh, at 5am in the dark with pissing down rain!

After even more coffee I headed to the ground early, fearing I’d be locked out like at Thanh Hoa last season. No such problem though, the streets were empty. I walked around the corner to be greeted by the sight of the older travelling T&T fans. They were heading inside and I was quickly encouraged, and pushed, through the door.

Apart from us there were approximately 4 other people inside. We were a bit too keen, by an hour and a half. There are certainly a few more travelling fan group fans this year and what better way to get involved by accepting an invite to be taught how to play the drums. I’m not exactly an extrovert and I was somewhat fearful of the huge Vietnamese man with two big sticks.

I played and wasn’t too bad, even red wig man had a small smile for me. This is great! I thought.  Until I got a bit carried away and totally lost rhythm, to a roar of laughter!

The first chance of the game fell to T&T as Ngoc Duy struck the inside of the post and Thanh Luong hit the side netting with the follow-up. A few minutes later, Van Bien miscontrolled a simple ball inside the box and Abubakar smashed home beyond a stranded Hong Son in the T&T goal. 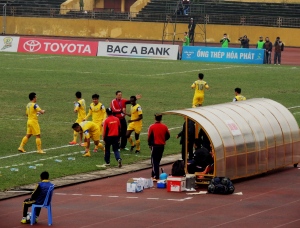 Not again. Another composed performance, clearly the better side but somehow losing. How have I managed to follow the Vietnamese Arsenal! Struggling on a very poor pitch to play their passing game and being hit with hard tackles, T&T failed to create much in the remainder of the half.

Nine minutes into the second half Hanoi were reduced to ten men. Gonzalo was adjudged to have elbowed the Nghe An central defender, who literally rolled back and forth 13 times, in the face. After last week’s dismissal of Samson, T&T will now be reliant on Van Quyet to get the goals in the next two matches.

Bouyed  by their inferior numbers, a front three of Ngoc Duy, Thanh Luong and Van Quyet stepped up a gear and created numerous chances. Nguyên Mạnh in the Nghe An goal made a couple of fine saves, while Ngoc Duy saw an effort cleared of the line. T&T central defender, Thanh Hao, made an exceptional last ditch tackle to deny SLNA doubling their lead.

Hanoi, so free scoring in the last two seasons, couldn’t find a way through and it was SLNA who wrapped the game up deep in to injury. With the Hanoi defence all pushing forward, Quang Tình was left free to latch on to a long clearance and round Hong Son, sparking jubilant scenes at the final whistle. 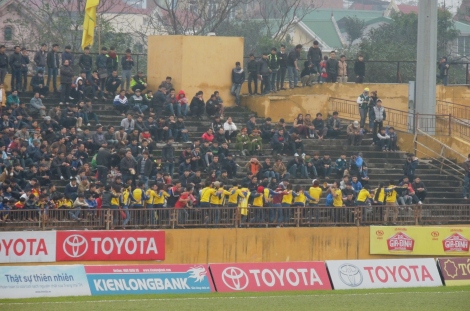 Party time in the home end

I trudged back into town surrounded by jubilant Nghe An fans. Tired, I was heading for my next overnight train. I bumped in to a rather dejected Nguyen Van Quyet as I left the hotel, who kindly invited me to take the team bus back to the capital, until he realized I already had a ticket.

Hitting the lumpy pillow on the creaking train was enough. And the next thing I knew I was bumping through the early morning street scenes of Hanoi.