Having spent the weekend in Hue watching league 2 action, I needed to ensure sure I’d be back in Hanoi in time for the visit of SLNA. This fixture has seen huge crowds over the last couple of seasons, with the team from Nghe An boasting the largest support throughout the league.

They’re also led by a passionate group of fanatics, a few of whom impressed as part of the VSF during the Suzuki Cup, who ensure plenty of yellow t-shirts, banners and scarves are available, and this season also producing a huge yellow and green flag to unveil at kick off. 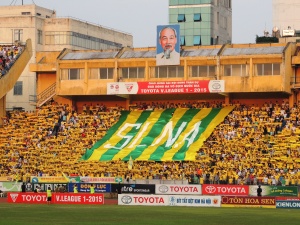 Rumours of 8,000 away fans was somewhat off the mark. We, the few hundred T&T fans were moved from our traditional spot in stand B, taking up two separate blocks in stand A (the older fans located behind the home dugout,and us, the Contras, 5 blocks away behind the visiting dugout. All this while around 14,000 visiting fans descended on the Hang Day stadium.

SLNA fans began taking their places 2 hours before kick-off, while the Contras scrambled for new scarves and then queued rather orderly to get in. I tagged along, receiving enthusiastic pats on the pack as I proudly wore my own new contras scarf.

The evening was all about the atmosphere. The Contras were relentless, toying with the somewhat subdued sea of yellow of the Nghe An supporter, who, in response would rise to the bait and occasionally chant en mass , easily drowning out any noise we were making. But the Contras continued; chant after chant, drums pounded. I looked around and saw the enthusiasm had swept up a number of neutrals.

To say the match was cagey would be an understatement. T&T have never beaten SLNA, losing 2-0 in Vinh City this season. The visiting support roared each time their team entered the Hanoi half, only to be thwarted by the new look T&T defence of Ngọc Đức, Đại Đồng, Thanh Hào and the experienced Quốc Long.

Players, coaches and fans were all pouring with sweat; this was one of the hottest evenings we’d had in a while, 35C! Goalless at half time.   Quan and I had been surrounded by a few overly excited Nghe An fans and i suggested we moved further in with the Contras.

Media coverage was high and I was summoned to give a TV interview at halftime. My prediction was a 2-0 win with Van Quyet stealing the show. It turned out his main contribution was to be a yellow card, which would rule him out of the next match!

The second half was equally as cage. Hanoi controlled possession but struggled to break down SLNA. I was starting to accept the draw, conceding it may end Hanoi’s faint chances of catching Binh Duong at the top of the league. Then it happened.The cross came in, a clever backheel from, then a clever backheel from Van Quyet and there he was, Samson, back in Ha Noi after missing the last four matches due to illness, swept home from two yards.

Pandemonium swept through our small band of fans! The huge T&T banner suddenly covered the whole block. I was underneath; celebrating & dancing with about 40 other trapped in this moment.

14,000 fans were silent. the neutrals happy to finally see a goal. and us? we were not quiet. We were finally going to beat SLNA.

Then, just four minutes later, a high clearance fell to Ngoc Duy just inside the T&T box who was adjudged to have handled. Penalty SLNA.  F*ck it!! Memories of previous football joy being stripped away flooded back; I was at Villa Park when Bergkamp missed his spot kick before Giggs scored that goal in the FA Cup Semi-Final in 1999, and plenty of other times when Stevenage or Arsenal had surely snatched the victory only to throw it away moments later. In these split seconds I hate football.

Quang Tinh steps up to take the penalty for SLNA

The whistle blew. Quang Tình set off on his short run up, connected with the ball. The rest was in slow motion as the ball climbed higher and eventually cleared the bar by quite a distance. As the ball passed the crossbar we all left the ground simultaneously. Before it even landed somewhere near the scoreboard, the huge banner was again hiding those dancing in celebration underneath. Incredibly scenes. we’d done it, even with 20 minutes left the game felt won. Samson, was removed. 38 minutes was enough after such a break, he’d done his job.

With top of the table Binh Duong next up for T&T, the return of Sampson and an incredible run of 11 games unbeaten, could the impossible be back on? 8 points behind with six to play. As the Contras say……..’Keep the dream alive’