With only seven days until the 2016 VLeague gets underway HaNoi T&T and and coach Phan Thanh Hùng have parted company. Ha Noi T&T’s U21 coach Phạm Minh Đức will take charge on an interim basis.

The club announced coach Hùng’s departure is due to health reasons, on the official website, they said “We regret to inform team coach Phan Thanh Hung will resign. We would like to express our sincere thanks to him for his contribution in the development of the team. Both sides have to split up temporarily for his health reasons.”

Phan Thanh Hùng has spent the last 6 years at T&T, winning the VLeague championship twice (2010 & 2013) and finishing runners-up on four occasions (2011 -12-14-15). He also led the club to two Vietnamese Cup finals, losing on both occasions in 2012 & 2015.  His final game in charge was last weeks AFC Champions League defeat at the hands of Korea’s Pohang Steelers. 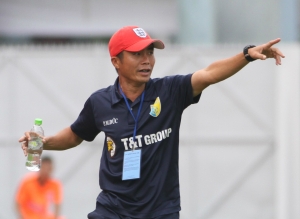 Worryingly for T&T fans, Phạm Minh Đức, who led the clubs’ U21 team to the Vietnamese U21 Cup last year, now has under a week to prepare his new team ahead of a tricky away tie at Thanh Hoa next Saturday.