09.45 20th February. Fan Club leader and bus organiser, Son messaged, “Bill, where are you?” me, “just 5 minutes away”, “oh, we left. Can you find another bus to Thanh Hoa?” My travels in the 2016 VLeague season were to begin with an adventure. I tapped my Xe-om driver (motorbike taxi) on his his shoulder and shouter “Ben Xe My Dinh, di di di”( My Dinh bus station, go go go!). We weaved through traffic for 8km, included a stint going the wrong way along the highway and I soon had a ticket to Thanh Hoa. 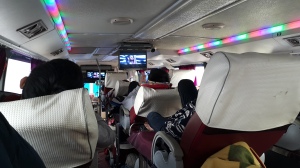 The next three hours were spent crunched a sleeper bus, in a what can only be described as a child sized dentist chair. I was dumped 4km outside the city, at the side of the road. Conveiniently, as what seems normal now since my time here, there was one Xe-om driving waiting for me. I often wonder if they call ahead to their friends…”Hey, we got a foreigner that will need a lift..”

Two hours before kick off and I was a dropped by the entrance to the stadium, surrounded by hundreds of noisy eager fans. The Contras (T&T fan group) were impressed with my dedication! The atmposphere was buzzing, with fans from both sides joining together as they set off in a truck to round up more support. We, the visiting fans, trudged around to the far end of the stadium (taking the obligatory worst spot in any sytadium). Tickets were 30k VND. Dozens of watermelons were purchased and we all had to eat at least a quarter of one for good health and luck in this new year and coming season. A strange and tasty ritual.

The (not so) lucky watermelon

The stadium quickly filled up, loud pop performances drained out the two noisy sets of fans before the season opening speaches began. Injured striker Gonzalo, and the other squad players joined us in the terraces. Perhaps Thanh Hoa had forgotten to give them ticketes.

T&T’s season got off to a similar start to my day….a through ball and confusion let to Slovenian striker Firer being sandwiched by T&T central defence pairing Victor and Nguyễn Thành Chung resulted in a penalty after just 1 minute. Pape Omar Faye coolly dispatched for the opening goal of the 2016 season .
T&T playing with a very unfamiliar line up (midfielders in defence, a new strike partnership and 5 players making their VLeague 1 debuts) picked up a bit with both Samson and new striker Loris Arnaud both missing the target with free headers. Just as it looked like T&T would easily get back in to the game, Hoang Dinh Tung was sent clear down the left, cut inside and curled a beautiful shot beyond Anh Duc and in to the top corner. 2-0 Thanh Hoa.

The second half was a non contest, with Thanh Hoa controlling the pace of play and eventually getting a third goal through another Faye penalty (71′) after Firer was brought down again, this time rather tamely. The goal sent the home fans wild, over 12,000 had packed in to the stadium, and the vanatge points in the houses and office that tower over this compact provincial stadium were also full.

The journey back was going to seem longer than three hours. All hope of a credible title challenge had been lost in the heavy opening defeat. That was until we found out our bus had returned to Haanoi without us! With no idea when a bus would be sent, about 25 of us hit a street side hotpot place. The soups came, mountains of vegetables, plates full of various organs and then the rice wine.

After a few hours on the rice wine our optimism had returned as we bumped along highway 1 back to Hanoi.