Along with a few thousand other Hanoians I’d been excited about the upcoming Hanoi Derby, T&T, a dominant force over the past few years up against FC, the new kids in town, VLeague 2 champions born out of the old T&T youth team.

The Contras had set about on a mission to round up further support with banners proclaiming ‘HaNoi is Yellow‘, in recognition of their all yellow kit (very similar to Valladolid in Spain), against their new city rivals who sport bright pink home kit. 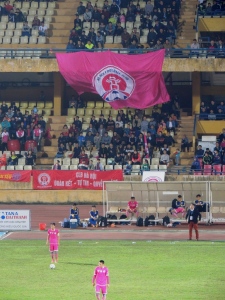 FC manager , Nguyễn Đức Thắng, looks on ahead of the ‘visiting’ fans

However, in line with the lack of professionalism that is often attached to the VLeague and the VFF, it was announced early in the week that Ha Noi FC would be relocating to Ho Chi Minh City ,as soon as round 5 of this year’s competition. It turns out the club were in talks as far back as September, and for some ridiculous reason have been granted permission to move midseason.

Not only are they moving, the rumors are that ex-Xuan Thanh Sai Gon outspoken chairman, Nguyen Duc Thuy, is involved in the move, who when accused of deliberately not fielding a strong squad for XT Sai Gon back in 2013, had a tantrum, withdrew the team and then disbanded the club. I’m guessing there is no ‘fit and proper person‘ test club owners must go through in Vietnam…. This has left quite a sour taste and really taken away from a city desperately trying to improve the image of local football.

Inside the stadium, fans once again packed in to the terrace, with more free tickets on offer. The home fans (T&T) were making plenty of noise, until drowned out by the hideous noise of their own vuvuzela’s. I even considered taking one, throwing it at a policeman just in the hoped they’d be banned from future matches. The police are slightly terrifying here and I wimped out.

T&T, ravaged by injuries, at least welcomed back Thanh Hoa in central defence, partnering Dong Dai for the first time this season and dropped Loris Arnaud in favour of Gonzalo, who returned to the front line. 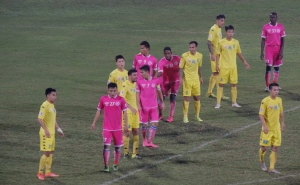 The first half wasn’t much of an affair, although FC went close through an Andrew Mwesigwa header.  In what some will see as a twist of fate,

T&T’s first central defensive partnership to actually contain two central defenders was broken after just 20 minutes when Hoa, playing his first match since his horrific tackle on Abass Dieng (leaving the striker with a badly broken leg in last year’s cup final), clashed with his own keeper, received a nasty concussion and was rushed to hospital. So once again, on came central midfield playmaker, Duy Manh, to play in defence. Van Quyet also dropped deep, in place of Thanh Luong, to play a more creative role just in front of Victor. It seems new coach Phạm Minh Đức, likes playing his best players out of position. Van Quyet played well, well enough to make the team of the week selection, but was certainly missed up front.

Ha Noi did though take the lead after Nguyễn Văn Dũng flicked on a corner for Gonzalo to power home Ha Noi T&T’s first league goal of the season. It could and should have been more after Samson saw his header come back off the post, and Hoàng Ngọc Hào made a wonderful goal line clearance from a Duy Manh header. 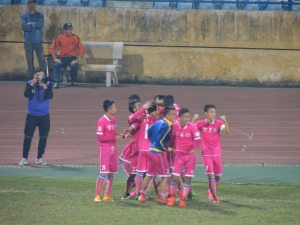 Defensive frailties returned though as FC’s Morace hooked a deep ball back to a FC player arriving in the box, who’s cross/shot was flicked in by Trương Công Thảo.

T&T: Played three, lost two & drawn one. Goals for 1. Goals against: 5. I grumbled ‘It’s not good enough to my friends as I left the stadium. Within an hour of the final whistle both manager, Phạm Minh Đức  and deputy club chairman had issued statements apologizing for the team’s performance this year, while praising the fans.