Quảng Ninh secured an impressive 3-1 home win over league leaders and North East rivals Hải Phòng in the final game of the weekend. The home side went ahead through Nghiêm Xuân Tú, with a cross that defied everyone and flew into the top corner. Rod Dyachenko, who saw a first half header come back off the post, doubled the lead just after the restart when he swept home from close range.

The home fans, notorious for their use of pyrotechnics, really put on a show, with the whole stand running alongside the pitch lit up for each goal. Not flares, as these are banned, but really big sparklers!

It got worse for the league leaders when leading scorer Errol Stevens saw red for a second booking. This was HP 4th red card in as many games. Lê Văn Thắng pulled one back for the visitors 2 minutes into stoppage time, only to see QN pile on more pressure and ex-Hanoi T&T midfielder Bùi Văn Hiếu restore the two goal lead with a smart low finish.

Hải Phòng have just one win from their last 9 games, and that was against lowly Dong Thap. Both Errol Stevens and strike partner Diego Fagan may face further disciplinary action for their reaction to the sending off.

Late goals by Gonzalo and Samson secured a vital three points for title contenders Hà Nội T&T at the Hang Day stadium. In a dire first half, which saw Nguyễn Đông Vịnh save Gonzalo’s weak penalty, the team bottom of the league were holding on. T&T never got into their stride, especially in the final third. The introduction of leading scorer Samson (carrying a light injury) on the hour lifted the home support but they had to wait until the 84’ minute for Gonzalo to head home and calm the nerves. Samson then tapped home his 13th goal of the season in stoppage time.

Gaston ‘the beast’ Merlo scored his 13th of the season as his in form Đà Nẵng confined champions Bình Dương to their 6th defeat of the season with a 1-0 win at the Gò Ðau stadium.. Merlo’s goal, unsurprisingly, was another fine powerful header, with Nguyễn Thanh Hải supplying the perfect cross.

Thanh Hóa registered their 10th win of the season after an entertaining 3-2 home win over Cần Thơ. In what surely must be goal of the week, Lê Quốc Phương smashed home a curling free kick after just 7 minutes to give the home side the lead.

Cần Thơ’s Oseni then stole the show with a brace, the second of which a fine solo effort. Taking down a wonderful through ball, the Nigerian striker then nut-megged a defender before smashing a shot in of the underside of the bar.

The home side hit back with just three minutes remaining with Lê Thanh Bình smashing home after the ball fortuitously fell to him unmarked inside the box. Deep into injury time Thanh Hóa piled on the pressure with Hoàng Đình Tùng’s long range effort coming back off the post on 90+3 minute. The VLeague has produced a lot of injury time drama this season, and this week wasn’t any different with Sunday Emmanuel sealing all three points when he glanced his header over the onrushing Nguyễn Thanh Diệp in the Cần Thơ goal, with 90+5 on the clock.

Long An drag HAGL & SLNA into the relegation battle

Marko  Šimić secured a vital 1-0 win over Saigon FC for struggling Long An. Dong Thap, with one win all season and 9 points adrift are set for the automatic relegation spot, with the second bottom team facing a play-off against the winners of the VLeague 2 play-off. With two wins in their last four matches Long An are now level with HAGL on 15 points and just 6 behind SLNA.

Controversy surrounded the weekend’s other game involving Sanna Khánh Hòa BVN & QNK Quảng Nam. Hồ Văn Thuận gave in-form Quảng Nam a 1-0 lead after 50’ minute. Reports have now been circulating that Khánh Hòa have officially requested the match to be replayed as deep into injury time they claim an Uche equaliser was wrongfully disallowed and provided evidence where similar poor refereeing occurred in their match against Saigon FC. The VPF cameras were not at the game so I’ve been unable to see the incident but a scan of the letter to the FA has been circulated on social media. 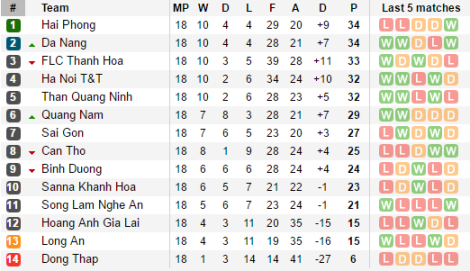