Đà Nẵng is not the most arduous of away fixtures. With amazing beaches and food I’m puzzled as to why I’ve only seen Hanoi T&T play here once before (a 0-1 defeat in 2013). Đà Nẵng’s coastline boasts some of the best beaches in the country including the famous My Khe beach, also known as China beach, and running all the way down to An Bang & Cua Dai beaches, just a stone’s throw from the ancient town of Hoi An.

Tough being an away fan in Vietnam…Danang beach

The train journey down from Hanoi is fantastic and one of the most impressive routes in SE Asia, as the train twists and turns around the famous Hai Van Pass. Seeing as I’m not a fan of flying I opt for the train, an overnight (15hrs approx.) sleeper for about $50. Having been on holiday to the region  a number of times and with some friends living down here I’m pretty much set in my ways; I stay at a hostel a few meters from the sand on An Bang beach, I eat a ridiculous amount of seafood and Greek Souvlaki (yep I Vietnam!), Commute to Đà Nẵng for the match and have a few beers back on the beach.

Being an away fan in Vietnam is very different to following football back in the England or throughout Europe. Theirs limited pre-match build up; no home or away pubs before the games, with fans sipping on jugs of ice tea instead. If there are in group of away fans, you’re typically just stared at in bemusement.

Today was slightly different, the Contras had arranged for 40 or so fans to drive down, for many it was their first visit to the seaside resort.

They were buoyant, a group of 5 spotted me and called me over for some ice tea by the corner of the stadium. We waited, I wasn’t sure where the rest of them were. A beaten up coach pulled up with a T&T flag on the front, but this housed the older fans (once again encouraged by the club to attend). There was a little excitement as Nhat and Son started to get phone calls and eagerly walked from one side of the street to the other.

About 3 years ago I wrote about a sea of fans clad in yellow shirts descending on the Hang Day stadium in Hanoi, all but a dream, even to this day. But here in Đà Nẵng something changed, it seemed to be a well-planned approach route as a posse of 30 T&T shirt wearing, flag waving, fans appeared at the main junction. They sang, boisterously, waving the now iconic huge flags of the Contras and marched along the main stand. One of the lads set off a smoke flare, carrying it the length of the stadium, filling the street with orange smoke (which was kind of strange as Đà Nẵng play in orange, but hey),this was the Contras making sure everyone knew they had arrived.

At the entrance to the open stand behind the goal we were given a stern talking to by a couple of policemen, who refused to let us in until we made a nice straight line in pairs. If it wasn’t for the fact that the concessions lady’s only two products were bags of water and cigarettes I would have felt like I was at school. I was soon the proud owner of two bags of warm water, sealed with an elastic band. It was 37C.

Chi Lăng stadium boasts probably the largest main stand in the country, but is past its prime and this will be its last season as the home of Đà Nẵng, who will move to a brand new facility next season. With this imminent move the owners have clearly opted to save money and have let the stadium become run down with huge weeds/plants popping up out of the terraces and surrounding running track.

T&T’s impressive recent form and Merlo leading a consistent Đà Nẵng, this had quickly become the most important tie of the season so far.  But What about 1st place Hải Phòng? I’m totally being bias and predicting their downfall, especially without their suspended front line of Stevens’s and Fagan for the next three matches (Update:they won at Champions Bình Dương 3-1 this weekend..which again proves I know nothing).

Hà Nội T&T began brightly, with the movement of Thanh Luong, Quang Hai & Van Quyet causing problems for the home defence, and Samson came close with a glancing header from a Quang Hai cross. T&T got the goal their early pressured deserved when, after 17 minutes, the home defence failed to clear a Van Quyet corner and Samson tapped home from a yard out.

Coach Lê Huỳnh Đức inspired Đà Nẵng to be on the front foot as soon as the second half began and Merlo tested Phí Minh Long with a low far post header. It was T&T, league runners-up for the last two seasons, who got the decisive goal though, when some shocking defending allowed the ball to roll to T&T Defender/striker Gonzalo who drilled home a low shot from the edge of the box.  Incredible scenes in the away stand as the travelling 100 or so, celebrated somewhat belatedly as we were so far away at the other end of the stadium!

someone hit the firework button when the home side won a corner!

Đà Nẵng, led by the talismanic Merlo, were not about to see themselves slip further from a first title since 2012.  A deflected cross looped in the T&T area and it was joint leading goal scorer and VLeague legend Gaston Merlo who was waiting. Back to the goal the Argentine concocted a low side bicycle kick/volley that flew into the net.

With that fantastic goal, Gaston ‘the beast’ Merlo become only the 3rd play in VLeague history to score 100 league goals. The other two are Samson and Le Cong Vinh.

The home fans, who had seemed to accidently set off their goal fireworks earlier for a corner luckily had a second batch hooked up and the 12,000 crowd roared their team on. Brazilian Eydison, who was lucky to still be on the field having left a trailing elbow in on Sam Ngoc Duc, came within inches of securing a point for Đà Nẵng, when his glancing header went narrowly wide.

As Đà Nẵng threw everything forward T&T could have finished them off, first, Samson broke free down the left, cut inside but sent his low effort wide of the post.  Just moments later Văn Quyet nearly embarrassed the home keeper, Lê Văn Hưng,  as he sent over a lob from 30 yards and the keeper only just managed to tip it over having rushed back from going up for a last minute corner! 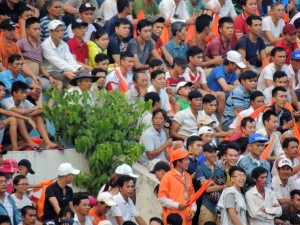 The huge plants protruding the terraces

A frantic end to a great encounter. Two teams battling it out for the title and both I am sure will be in the top two come the end of September. The battle between the two Argentinians, Merlo and Gonzalo, was fantastic. Hanoi T&T striker and Captain Gonzalo made the Team of the Week, as a central defender! The last time he played this many games in central defence was in 2013, when they went on to win the Title. Coincidently Danang finished runners up that year.

Next up: The biggest away day of the season and first versus second: Hải Phòng v Hà Nội T&T, Saturday 13th, 5pm.