Viettel booked their place in the V League 1 play-off Final after a thrilling 3-2 win over Nam Định.

Nam Định had progressed to the play-off match 2 having seen off 4th placed Đồng Nai in the first round. Second placed Viettel, born from the ashes of the formidable Thể Công, have now set up a final showdown with Long An. 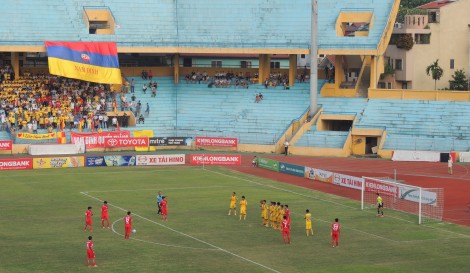 Viettel, began brightly and after just 6 minutes Đàm Tiến Dũng put them ahead with a low free kick from the edge of the box. The chances kept coming for both teams with Nam Dinh missing an easy one-on-one and Viettel themselves then hitting the bar.

Veteran central midfielder Đinh Văn Ta was running the show for Nam Định and even missed an audacious overhead kick. He didn’t need to wait too long to get on the scoresheet,  equalising from the penalty spot just after the restart.  Nam Định’s noisy fans we not celebrating for long as they saw their defence fall asleep and Bùi Duy Thường slid home from close range just 4 minutes later.

Nguyễn Trọng Đại is carried off after scoring a wonderful volley

Nguyễn Trọng Đại then sealed the match with a wonderful volley from the 25 yards with 20 minutes remaining.  Unfortunately he injured himself in the process and didn’t return to the pitch. The game turned a bit sour a few minutes later when a Nam Dinh goal was rightly ruled out for offside and Phạm Văn Thuận instantly received a red card for dissent. The atmosphere also boiled over in the away sections as fans clashed with police after setting off flares and chanting ‘vulgar slogans’ (that’s how google translated it!)

The game was being played at true cup final tempo and the ten men kept pressing. They were rewarded with another penalty after 78 minutes and Nguyễn Hữu Định sent Viettel keeper’, Ngô Xuân Sơn, the wrong way. 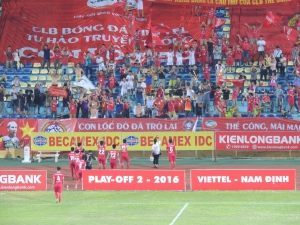 Viettel now face Long An in the Final

Both teams then had great chances to score another with Nam Định’s Hoàng Minh Tuấn missing the target as he tried to lob Ngô Xuân Sơn and then Viettel’s Dương Văn Hào missing another one-on-one late on.

This was easily one of the most entertaining matches I’ve witnessed this season and Viettel now have a little over three weeks recover before facing Long An in the final on September 23.