Quảng Ninh v Hà Nội T&T . The penultimate weekend of the 2016 VLeague championship. The top three (Quảng Ninh, Hanoi T&T & Hai Phòng) are only separated by goal difference with Đà Nẵng just a further point behind. Even Thanh Hóa in fifth were still in the hunt, although they’d need a minor miracle to secure the title.

This game was unmissable and I was rather pleased when my Chinese Visa was delayed and quickly got my Passport back and canceled my trip. I was off to Cẩm Phả, the capital of Quảng Ninh Province.

Fans and media alike seemed to be getting carried away billing this as a title decider. It wasn’t. The match would play a decisive role in where the title may go, but nothing would be sealed come 7pm.

The journey to Cẩm Phả took around 6hrs (with a long lunch break for some rice, tofu & meat). The scenery is stunning as the Karst formations, bringing fame and thousands of tourists to Halong Bay, continue on deep in to Quảng Ninh. Beyond the tourist buses the area becomes a lot more industrial and is famed for its mining. Even so, looking beyond the building and factories the landscape was still beautiful.

Cẩm Phả stadium is located just off the main road, in a nice residential area. The stadium is either new or recently renovated, with two covered sides and seating the whole way round. It’s compact, even with a small (4 lane) running track you feel close to the action. The pre-match atmosphere was jovial, fans mingled even with the Contras as they (joyfully) march to the home section letting off flares and smoke bombs. There’s a mutual respect between the fans (I actually think many T&T supporters may herald from Quảng Ninh) which is probably based on both sets despising local rivals, Hai Phòng.

The stadium filled up early, with over 12,000 packing in. The home fans, notorious for their use of pyrotechnics, had rigged up the whole stadium and planned to set off the fireworks/massive sparklers at various points. As the teams entered, those around us in the away end went off. We were then safe to lean against the walls.

As the game got underway I was worried. Having discussed the various form guide and stats for both teams on the Hanoi Football Show Podcast I knew winning here would be a very tough call. My fears seemed to be confounded as Xuân Tú instantly caused the T&T defence problems down the right. Each time a defender lunged at him the pacy winger easily jumped over. Within 10 minutes the ball was in the back of the net and the fireworks were set off again. Kizito had somehow flicked the ball beyond An Duc and reeled away celebrating. Prematurely though! The goal was ruled offside to the delight of all of us in the yellow of T&T

Quảng Ninh continued to dominate and T&T hardly had a look in all half. With Đà Nẵng and Hai Phòng comfortably winning half time was a quiet affair in our end. It probably wasn’t very quiet in the changing rooms and T&T coach Chu Đình Nghiêm clearly said something that inspired his players as T&T came out flying in the second half.

The front three of Thanh Luong, Van Thanh and Van Quyet were electric in their breakaways. The home defence failing to keep up with the attacks resorted to committing innocuous fouls, a match total of 24! Half chances began to be created, with Van Quyet failing to hit the target when unmarked with a header. Thành Chung replaced the impressive Văn Thành, going straight in to central defence and Gonzalo moved up top. We were going for the win. 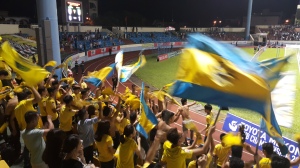 Gonzalo quickly lined up an effort from distance, dragging his shot wide. The game then turned in T&T’s favour when Nguyễn Xuân Hùng handled on the half way line, to break up another pacy attack and received his second yellow card, and then the red (once Victor informed the ref he’d already been booked!). Ten men and 20 minutes to go. Quảng Ninh attacked again, this time Anh Đức made a fine save with his legs to deny Nguyễn Hải Huy.

Time was running out.  Gonzalo missed the target with another long range effort.

A rare chance fell to Dyachenko, unmarked inside the box but the prolific striker completely missed the ball. A let off. Then more controversy as 90 minutes approached; Quảng Ninh broke down the right, Thanh Luong elbowed Xuân Tú off the ball and received a straight red, leaving the field as plastic bottles rained down from the main stand.

The game restarted and T&T continued to push for the winner. It felt hopeless though, time was surely up and we’d both fall below Hai Phòng and Đà Nẵng. One last corner for T&T. Van Quyet rose, unmarked, and headed against a defender. The rebound then fell back to him and he smashed home. Incredible!! We’d nicked a win with the last kick. The bench were on the pitch. There’s was pandemonium in the away end. I’ve never seen a T&T goal celebrated with such fervour from our fans and I include myself in that. Absolutely brilliant.

Note: The last time T&T won the league in 2013 the title was sealed away at Long An. I was the only away fan that day.

The whistle went. We were still top, courtesy of a +3 goal difference over Hai Phòng. The celebrations then went something like this: pitch invasion, street dancing with lots of flares, hotpot and more flares in a beer club, complete with plenty of rice wine. We finally got back to Hanoi around 1am. Superb away day.

Next: We host Thanh Hóa on the final day of the season, Sunday 18th September. Hai Phòng host SLNA. All 4.30pm kick offs.