Hanoi FC defender, Đoàn Văn Hậu, has been awarded the 2017 AFF Young Player of the Year at at the annual awards ceremony held in Bali, Indonesia. It’s been an incredible year for the 19 year old who made his first team debut for Hanoi FC in the ACL Qualifying defeat in Hong Kong against Kitchee January. 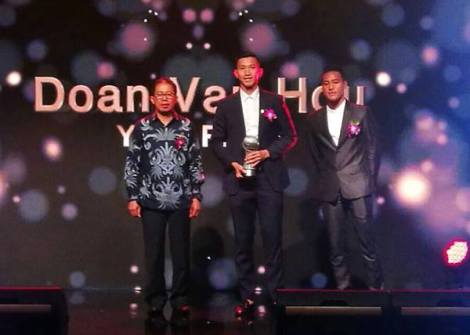 Văn Hậu had to wait 6 months for his league debut, coming on as an injury time substitute against rivals, Hai Phong, in July. He has since gone on to make five V League 1 appearances, albeit all coming from the bench.

Lack of domestic football hasn’t stopped him gaining international experience, which surely prompted this prestigious award. He featured in all 3 of Vietnam’s group games at their first ever Fifa tournament, the U20 World Cup in Korea.

In 2016 Văn Hậu featured in all five of Vietnam’s matches at the U19 AFC Championships held in Bahrain, where the young team impressed, falling at the semi-final stage against eventual winners, Japan.

Further appearances for the U22 side at the 2017 SEA Games were followed by a full international debut, in a 2-1 win for Vietnam in Cambodia, securing three vital points in the race for a spot at the 2019 AFC ASIAN CUP.

With 8 rounds remaining in the VLeague and Hanoi very much in the race for their fourth title, the central defender will be hoping for more game time, especially in an inconsistently performing defence and one currently hit by a number of suspensions to key players.

National team of the year – Thailand