Round 24 produced more drama in Vietnam’s top division as 5 teams fight it out for the 2017 title.

Thanh Hoa’s push for their maiden title wobbled again as they only managed a draw at home to struggling Binh Duong. Nigerian striker, Uche, gave the home side the perfect start, latching on to a long through ball for his 11th goal of the season.

Fortune didn’t favour the home side in the second half though. With Binh Duong’s Nguyen Anh Duc, bearing down on goal, Thanh Hao’s Lê Văn Đại’s attempted clearance lobbed the keeper from 20 yards.  Thanh Hoa’s dominance paid off and they looked to have been given a lifeline when the referee awarded a 91st minute penalty. 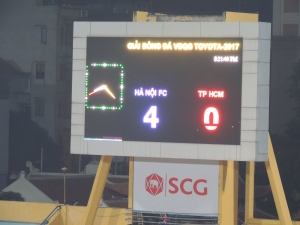 Hanoi FC produced a dominant display to see off TP HCM 4-0 at the Hang Day stadium. After a goalless first half, the lively Văn Quyết eased the nerves with a calmly dispatched penalty on the hour. The Champions had to wait until the 80 minute to finally see off a resilient HCMC with goals from Đỗ Hùng Dũng (80′), Oseni (84′) and Hoàng Vũ Samson (90’).

Quảng Nam retained top after a 2-1 victory over Quảng Ninh, in front of a noisy 13,000 fans in Tam Ky. The fixture was delayed by a nearly week due to the flooding after Typhoon Damrey devastated the region

In an entertaining match Quang Nam, undefeated in 11, took the lead through a wonderful 30 yard strike from defender, Đặng Hữu Phước. It was the full backs first professional goal. Coach Phan Thanh Hùng has instilled a certain belief and transformed Quang Ninh in to a strong top flight side and equalised through Patiyo’s 9th goal of the campaign.

A penalty for Quảng Nam  secured all 3 points after Dương Thanh Hào handled in the box and Đinh Thanh Trung, one of the stars of the season, stepped up for his 8th league goal and seal a 2-1 victory.

Khánh Hòa, the surprise team still in the title race, kept alive their hope of a first ever league championship with a last minute winner in Cần Thơ. Võ Út Cường put the visitors ahead before Amougou scored his 12 goal of the campaign in what looked to have secured the struggling side a point.  Lâm Ti Phông sealed the win after Can Thơ had Emmanuel sent off, the strikers 6th goal of the campaign.

Long An’s dismal season has finally come to an end as a 3-2 defeat at Sông Lam Nghệ An sealed their fate and relegation to VLeague 2. The two times league champions have been adrift at the foot of the table since round 6, having only secured 2 victories all campaign.