Hà Nội FC made it two wins from two with a convincing win at Cần Thơ.  Having dominated possession in the first half Hà Nội could not find a way past the Cần Thơ keeper, Tô Vĩnh Lợi , and when they did, Oseni’s clever back heel came back of the post.

With 25 minutes remaining Hà Nội’s pressure finally paid off when Moses headed home from close range for his first goal for the club.  Nigerian striker Oseni sealed a comfortable win with an injury time brace. The first, a superb curling effort beyond Vĩnh Lợ, and the second a nicely disguised low finish that flatfooted the keeper. Oseni has now hit 10 in 11 appearances for Hanoi. 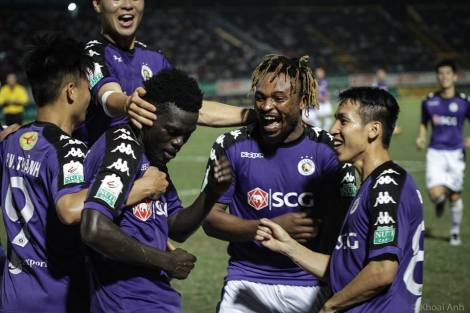 Quảng Ninh also maintained their 100% record after coming from behind to record a 2-1 victory at Sài Gòn FC. Lê Hoàng Thiên gave the home side the lead with a smartly placed finish on 11 minutes. However, just 5 minutes in to the second half Nguyễn Hải Huy calmly placed Nguyễn Xuân Hùng’s cutback in to the top corner for the equalizer. Eydison sealed the points for the visitors 6 minutes later with a powerful header.

Sài Gòn striker Da Sylva twice struck the bar in the second half from long range free kicks and the home side will certainly feel aggrieved not to have taken at least a point from the match. 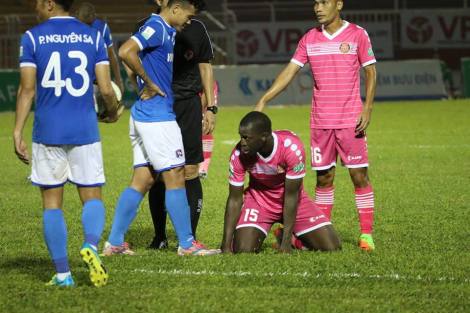 2018 player of the year Đinh Thanh Trung opened the scoring from the penalty spot after Da Nang’s Lê Văn Hưng pulled down Hà Minh Tuấn after the keeper had initial miss-controlled a back pass.

Another keeper error led to the equalizer, when Phạm Văn Cường hesitated on a through ball and U23 player Hà Đức Chinh pounced to nod home for Đà Nẵng, before Diogo the delighted the home fans by sealing the win deep in to injury time with a 20 yard free kick.

Due to SLNA and Thanh Hóa’s participation in the AFC Cup, four sides were making their 2018 VLeague bow.

The hosts’ campaign got off to a winning start after the visiting defence failed to clear a long ball from Thanh Hóa keeper Bùi Tiến Dũng and Hoàng Đình Tùng tapped over Thanh Diệp.

Khánh Hòa started their 2018 campaign with a 1-0 victory over SLNA at Vinh stadium. Lâm Ti Phông got the only goal of the game, somewhat against the run of play, on the stroke of half time. Phan Văn Đức had the best chance for SLNA when his close range effort came back off the upright.

Bình Dương beat Nam Định 2-1 thanks to goals from Hồ Tấn Tài and a first V.League strike for Romario Kortzog, with Phạm Văn Thuận scoring for the visitors. Hải Phòng & Hoàng Anh Gia Lai fought out an entertaining 1-1 draw in front of 21,000 fans at the Lạch Tray Stadium. The home side took the lead through Jamaican striker Andre Fagan before Lương Xuân Trường equalized 5 minutes from time with a deflected free which left Đặng Văn Lâm flatfooted in the Hải Phòng goal.