Newly promoted Dong Nai were in town for the Sunday afternoon match at the Hang Day stadium. With no league game since the poor performance in Ninh Binh and some 20 days passing by, my excitement for this match had grown somewhat. I’d spent some time studying up on the T&T squad, wondering how these players would fair against the newest team to the Vleague, would they lose again? Possibly setting the tone for a dismal season?

I have to admit I didn’t know where Dong Nai was and had to look it up; it’s a province east and northeast of Ho Chi Minh City with a population of 2.5 million, with the largest city being Bien Hoa. I began to realise there wouldn’t be any away fans making the journey.

Arriving at the stadium there were similar numbers to the previous home game milling around outside; let’s just say it wasn’t crowded. Even though there are official ticket desks (yes, a couple of small tables are set up in the street) there seem to be more touts (scalpers) than are really necessary for such an event.  Trying to purchase my tickets from the official desk started quite an interesting sales pitch between two older ladies (touts) trying to sell me tickets; forcing them in my face, arguing amongst themselves, pushing each other’s tickets away each time and then shouting at the girls on the official desk. All this and still offering me their tickets at face value. No profit? Or are they purchased at a discount? Fake maybe? I don’t think I’ll ever figure it out. I paid my 40k VND from the official desk and took a wander around the stadium.

For this game we decided to sit in a different location, in the main (well, busier) stand opposite the Hanoi Fans with their drums and trumpets. I’m sure I will be back amongst the more fanatical fans when T&T visit Thanh Hoa soon. I was interested to see who else goes to watch T&T and was pleased to see five huge drums being carried in to the same entrance we were heading in to. Away fans perhaps? No. More T&T fans (with the same matching t-shirts as the main group opposite), great I thought and the age profile was certainly different too. The younger fans were out, mostly clad in official (old ones worn by the players themselves) shirts from previous seasons and yellow head bands were soon passed out to everyone.

Five fans took to the drums as the teams entered the pitch and the noise level raised, there was real excitement for a moment, well I felt excited, and the fans opposite were certainly having a good time. 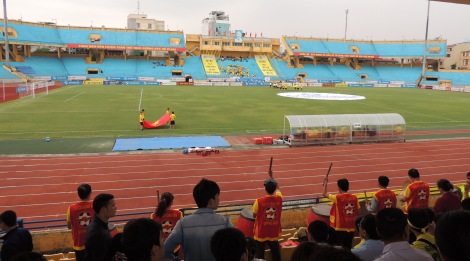 As the game got underway T&T soon started to dictate the pace and the fans were certainly enjoying the home team’s possession. After a couple of early half chances for T&T, Marronkle opened the scoring with a near post header on 17 minutes. This was the catalyst for T&T to step up a gear and Thanh Luong smashed in the second 3 minutes later after great play by Samson. It was then Samson’s turn as he crashed the ball in to the roof of the net from 8 yards out. 34 minutes gone; T&T 3-0 and I was starting to wish I had sat in the opposite fans amongst the singing and dancing. After each goal the younger fans around us perked up to salute the goal scorer with the same song each time, just replacing the name, and then many either went back to their Smartphone’s or flirting with the few girls who has come along.

3-0!! After that terrible result in Ninh Binh we were going to enjoy this one and I was on the edge of my seat for the remainder of the half hoping to see the flood gates open. Not a lot else happened. Dong Nai missed a decent chance. The fans opposite were having a great time though with the wig wearing hip swinging fan leader in top form.

Three minutes in to the second half and Duc Nhan pulled one back for Dong Nai; dampening my half time talk of a mauling. It didn’t seem to bother the Hanoi fans opposite with drums, trumpets and cymbals in full swing, although many of the supporters located around us cheered the away goal with as much fervour as the Hanoi goals; another example of people just wanting to see goals, or perhaps being too drunk and forgetting the teams switched ends at half time.

Nonetheless this didn’t spur on Dong Nai to an impressive comeback as they then sat even deeper and forgot how to control or pass the ball to their teammates. T&T began to dominate again and as the whole Dong Nai defence fell as Samson ran through, skipped past one defending and chipped the ball past the advancing Anh Diep. 4-0 and still half an hour to go. It was soon 5-1 as Van Quyet converted a penalty after the visiting full back decided he’d rather be a goalkeeper and dived to handle a cross. There were still over twenty minutes to go but this goal seemed to signal the end for many, they’d seen enough and went home; it was reminiscent to the Emirates Stadium….kind of, with the help of a little imagination!

On 78 minutes Van Quyet latched on to a wonderful through ball and lobbed the keeper’ from outside the area. 6-1! Shame not many people were there to see it, it really could have been more; T&T has 3 second half goals ruled out.

Three games played and up to fourth in the table. Next up is another home game; this time welcoming the inform Song Lam Nghe An, which promises to be a great match as they sit proudly at the top of the table with three wins out of three and boast the prolific, ex T&T striker Le Cong Vinh in their ranks.