With no other plans for Saturday afternoon I decided to wander down to the Hang Day stadium for my first experience of Vietnamese second tier football.

I was fully aware that not many people would be making their way to the match and expected the company of just a few die hard football fans.  I killed some time hanging out at a café on Ngo Hang Chao, having my pre-match nau da (ice coffee with sweet milk) and taking in the daily life that occurs around this stadium where other cafes are located directly below the stands, street food vendors set up their various stalls under cover of the imposing stand, while around the corner the rear wall behind the goal is proudly home to many street barbers; who hang theirs mirrors on the faded yellow brickwork.

Only two entrances were open for the game, a ticketing table was again set up outside of each; charging 20K VND per ticket. Upon entry I noticed a man setting up a drum and then another at the far end, maybe there would be a little bit of atmosphere. As it turns out there was in fact a decent number of fans for the game, perhaps 200-300, along two of the most impressive and dedicated drummers I have come across so far. These guys were quite incredible; relentlessly beating out tune after tune which made for a nice atmosphere. I was pleased too when I noticed the main profile for the game was young families and lots of kids who seemed to be enjoying themselves. This is vitally important as these are the future of football in this country; not just players but also the diminishing fan base. All in all as kick off approached I was pleased I’d wandered down for the game.

The first half was quite entertaining with Hanoi having the majority of possession with the clearest chance coming on 31 minutes when the visiting goalkeeper tipped a low shot around the post; which wasn’t recognised as a great save as a goal kick was given. With the ferocious drummer beating non-stop and lots of pressure from Hanoi the fans were certainly enjoying themselves, with many opportunities to wave their pink flags…Not sure why they’ve adopted the colour pink?

The half time whistle went with the score goalless.

The second half was more of the same; plenty of Hanoi possession, some nice football, a lot of loose passes and relentless drumming. For this half I’d moved 4 blocks over to check out the other drummer, who, in his red bandanna  was even better than the guy I’d sat near in the first half! Hanoi striker Lionel had a goal ruled out just after the hour for offside and as fitness levels seemed to drop the game became stretch with more long balls bypassing the midfield. Quang Nam should have taken the lead 5 minutes later when after a great cross a header was blazed over. Hanoi rallied again and dominated possession only for Quang Nam to break away and against the overall run of play snatch the lead through their Argentinian striker Nicolas Hernandez. 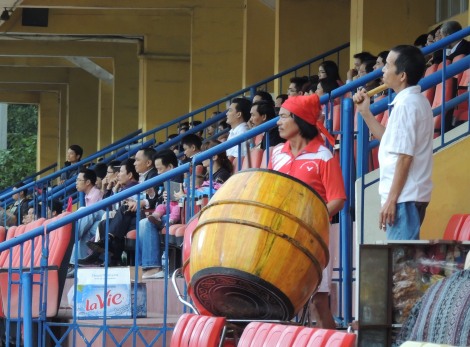 One of the fantastic drummers

This killed the game and for the last 20 minutes Hanoi lacked any real quality as they sought an equaliser. With minutes to go surely throw on another striking option, but it seems there is an obsession here with foreign strikers that can’t be substituted; possibly the reason why the national team lacks depth in their striking department.

The game finished 0-1 and the visiting players were delighted. It was a good game and when Hanoi FC’s fixtures don’t clash with those of T&T I’ll be sure to come along again.