Throughout the last eight months I’d envisaged the final day of the season on many occasions. From a packed Hang Day stadium, celebrating Hà Nội T&T’s first back-to-back VLeague titles, to something of a more somber affair having been pipped to the title by either Thanh Hóa  or Bình Dương. As we know, last week’s results meant Bình Dương were in fact the 2014 VLeague champions. However, nothing had prepared me for what was in store on the final day of the season.

I’d reluctantly accepted Bình Dương were, especially over the second half of the season, the better side and was confident of seeing some decent football against a Thanh Hoa side still battling with DaNang to secure third spot. T&T striker, Samson, also had the personal goal of becoming the all-time season top scorer; two goals would see him notch 24 for the season, surpassing Almeida’s fine season for DaNang in 2008 .

The team, with a new addition (3rd,far right)

A few hours before the game I received a call from T&T striker, Bao Khanh, explaining the club President wished for me to come on the pitch after the game and to give me a club T-Shirt. Quite a turnaround from the questionable looks I’d received when we were introduced some 3 months ago at DaNang airport.   Like a child I was pretty excited until I realized I’m naturally a rather shy person and I have to be on the pitch in front of quite a few people. Bollox.

Thanh Hoa had once again brought a decent number of fans up to the capital, and there was certainly a buzz around the Hàng Đẫy Stadium….rather strangely this would continue throughout the game, even with nothing to play for. I was stopped from buying tickets by suspended striker Gonzalo, who supplied us with complimentary tickets (it seems only 10% of fans actually purchase tickets at some games!).

Lê Quốc Phương opened the scoring for Thanh Hoa, sending the noisy travelling support wild, and a fair few of the fans around me. I glanced around and noticed the other T&T fans had slumped down and were reluctantly updating the score on various social media sites. Half time came, 0-1, this wasn’t the ending I’d dreamed of.

But once again, my theory that Ha Noi only take the second half of matches seriously was proven again. Bùi Văn Hiếu flicked in an equalizer just two minutes after the restart before the towering Cyrus powered in a header for his first goal for the club. Nguyễn Văn Quyết completed a sensational 7 minutes for T&T, when showing great strength and a neat finish to beat Tô Vĩnh Lợi  in the visiting goal.

We, the few, rose in celebration, some were tweeting, facebooking, whatevering….T&T were back, and playing superb football. Four fans in front actually missed Văn Hiếu ’s goals due to mobile distraction! Although they celebrated like they saw it though.  It was short lived though, as Lê Thanh Bình  beat Van Cuong at the second attempt to pull a goal back.

That was as close as Thanh Hoa would get to pulling off a final day result in the capital. Samson, realizing he hadn’t scored today, decided it was time to add to his 22 goals this season. But only once though, he would become the tied record goal scorer. Unselfishly Samson turned provider, setting up young Phạm Văn Thành for another late goal (his forth of the season from the bench).

Samson, by far the best best striker in the league

The final whistle spark rather muted celebrations from both sides/fans. T&T had impressed again but missed out on the title, while Thanh Hoa had held on to third spot, despite losing. My phone rang. It was Thạch Bảo Khanh. I was to meet the (club) President, Nguyễn Quốc Hội. Ushered past the security, I was introduced to the President and large number of media currently on the pitch. The fact I didn’t have a club shirt on proved disappointing and an old one of Tiến Dũng ’s was acquired from an old lady. It was tight, why couldn’t I have had one from the giant Cyrus?

In my figure-hugging top, I posed with the President and then gave an interview. Again I was asked to compare the VLeague to the English Premiership. I glanced so my girlfriend in the stand could take a picture of my ‘big moment’ and then hoped to head back to the stand.

No chance. I had a shirt, I was part of the team.  There was no time for my awkwardness to kick in; I was in the lineup of Hà Nội T&T players waiting to receive a VLeague runner-up medal! I had been disguised as a member of the squad by the President and Bảo Khanh . Thành Lương , Ngọc Duy and  Văn Hiếu all thought it hilarious as they gestured me to join them. There was no time to waste, we were about to trick the officials in to giving me a medal. 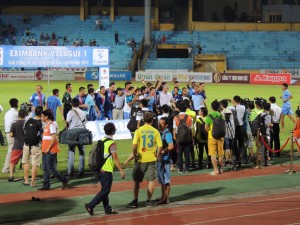 I shook hands with the League’s representatives. They congratulated me on a fine season, even though I personally feel my fitness let me down at times, and the last guy presented me with a medal! I joined the squad for the photos, Gonzalo and Tien also found it hilarious when they saw me. I’d brought some laughter along with my blog.

A superb and humorous end to another season in the VLeague. Hà Nội  T&T, President Nguyễn Quốc Hội ,Bao Khanh and the rest of the squad….I thank you for a great 7 months of football.